With Norwich City’s transfer business having stirred up a social media storm this week, football seems a restoration to normality.

If Norwich needs proof that long term strategy and planning can be a blueprint for success, they only need to glance at their opponents this weekend for evidence. Lee Johnson was under a huge amount of external pressure, with supporters venting their angst by creating banners and making their feelings abundantly clear to the powers that be at Ashton Gate.

A year on however, and Johnson has masterminded a victory over Manchester United and Bristol City currently lie in a healthy position this season. Quite the turnaround for a man with his head on the chopping block last campaign.

Bristol City has grabbed numerous headlines for their on pitch revival and push for the dizzy heights of the Premier League, but this has been a formula put into action several years previous.

What can Norwich expect as they travel to Ashton Gate on Saturday? 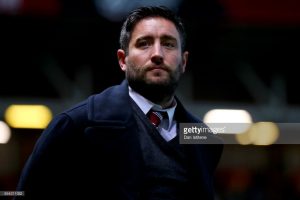 Bristol City is reaping the rewards for standing by their man despite extreme external pressure including banners calling for his removal last campaign. His side has battled against both entities of Manchester, conquering the red side and leaving the blue side sweating following a heroic display in the semi final of the Carabao Cup.

Johnson, the son of Gary, was appointed at Ashton Gate in light of two highly productive spells in charge of Barnsley and Oldham respectively. He returned to his old stomping ground with the long strategic aim of reaching the Premier League.

Johnson is still at the embryonic stage of his career in football management and has endured both scrutiny and praise.

The revival he has embarked upon has seen his value soar amongst the red contingency in Bristol as he has constructed a side that can not only compete in the division, but also against superior opponents in cup competitions.

Money is freely available at Ashton Gate, but with the redevelopment of the stadium and a  plan for a new training complex costing a seven figure sum, Johnson has found funds on players limited to a degree. Admittedly, they did break their transfer record as Johnson sought for significant improvement upon last season’s underwhelming display.

He has constructed a squad suited to this division, and although they have lost their last two games, be sure that Norwich will meet a Bristol City outfit spearheaded by an astute head coach. 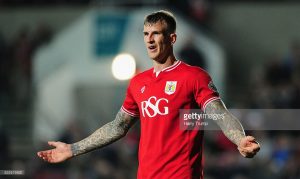 Norwich was linked to him prior to this campaign, but Aden Flint has been a mainstay in an occasionally defensively robust Bristol City side.

Flint’s physicality and consistent execution of defensive components makes him one of the best operators in the division. The ex-Swindon Town defender has proliferated up the divisions and should Bristol City achieve promotion, his pathway and narrative will undoubtedly be compared to that of Jamie Vardy’s.

Only seven seasons previously, Flint was lining up for Alfreton Town, his rise has been meteoric. Flint has been a colossus for the Robins during this campaign. His aerial dominance has been a much needed resource in both boxes and the threat he poses from set pieces offers an alternative to the patient build play.

Categorised as a traditional centre half, ball playing is not one of Flint’s strengths. At 6ft5 his physicality will give Norwich’s offensive operators a tough afternoon. Statistically, Flint has been sensational in defensive phases of play. Flint’s stock is rising but Bristol require him to stick around in order to mount a serious promotion challenge.

Flint’s task tomorrow is to reduce the productivity of Norwich’s offensive front line that could miss Alex Pritchard after he departed Carrow Road to join Premier League side Huddersfield Town. 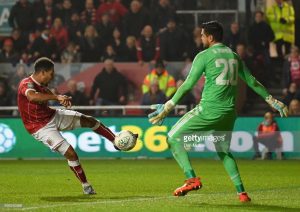 Johnson has constructed the Robins to be possession based in regards to philosophy. City’s technicians are designed to pass teams into submission and attempt to penetrate the thirds and break through opponent’s thirds. It’s an intricate and delicate style which has aided Bristol City’s upward mobility this campaign.

This free flowing football is built from a substructure of attempted defensive solidarity. The positions between the reargued are condensed thus creating the aforementioned solidarity defensively. At points, they have failed to restrict chances from the opponent and that has led to a poor run of form. A congested schedule could have led to a lapse in concentration.
Pundits Predictions:

Chris:  Bristol, of course – have recently knocked Manchester United out of the Carabao Cup in the quarter final and narrowly missed out against Man City in the semi first leg. However, their last league game saw them being beat heavily away from home 5-0 by Aston Villa. They will certainly want to prove wheels haven’t fallen off the bus in regards to their league campaign. Farke will more than likely a play defensively minded team and save players for Cup replay against Chelsea before another monumental home game against Sheffield United incoming. Should Norwich grind out a result in Bristol, I won’t be complaining. Head says 1-1. Heart says 1-2 Norwich. Come on the boys. On The Ball City! 1-1

Connor: A difficult afternoon could be in store for the improved Canaries. The hosts will look to use the momentum gained from their incredible performance against Manchester City in the Carabao Cup semi-final first leg in midweek to launch their assault on the top two here.

After a dire patch of form, things are finally looking up for Daniel Farke’s men. The Canaries have the chance to climb into the top half here and will hope to be in the play-off mix come May.

All eyes will be on Bristol City here after the events of Tuesday night. Daniel Farke will hope the added pressure and expectations that have followed from the Manchester City defeat overwhelm the hosts. Norwich will fall to the sword of the confident and high flying Robins. 2-0