Upon the bookmaker’s odds for promotion for this season, few punters would have bundled money on Neil Warnock’s Bluebirds being one of the early Championship pace setters. Alongside Sheffield United, Cardiff has been this seasons surprise package. Transfer fees spent have been minimal and, with an adept manager, Cardiff has displayed how defensive organisation and offensive simplicity can see you proliferate up the table.

With only 13 goals conceded, it’s fair to say that defensive solidarity has been of the upmost importance to how the Bluebirds apply their trade this season.

But with a toothless and uncreative Norwich side suffering from an abundance of absences, the Welsh outfit will be firm favourites when Norwich visits the Cardiff City Stadium on Friday evening.

But what can Norwich expect when they enter Wales on Friday? 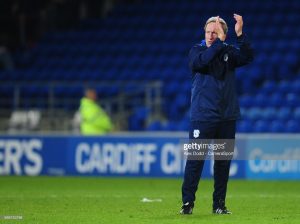 Love him or loathe him but you cannot ignore him.

Few have more experience in English football than Neil Warnock. At 69 years of age, to be a football manager pushing at the top end of the table in contemporary times is a vast achievement. Philosophy has been a buzzword being used in the wings of Carrow Road, but Warnock has developed a philosophy over his 38 year managerial career.

His football is often seen as regressive but Warnock’s style has seen him achieve a plethora of promotions.

In order to achieve a long and illustrious career in the frenetic culture of football management, you must improve and adapt to the ever changing landscape of English football. Something Warnock has done.

Prior to his QPR reign, Warnock was a traditional 4-4-2 manager. A well devised back four with conventionally dynamic wingers with a direct style was Warnock’s go too style. His subsequent appoint at Loftus Road led him to discover the talents of Adel Taarabt.

Warnock adapted to a 4-2-3-1, thus moving in line with the current trends of post 2010 football. He won the Championship with QPR in spite of an off field circus but the jump to establish himself in the Premier League has been a step too far for him.

Warnock has arrived at Cardiff via Leeds, Crystal Palace and Rotherham desperate for another promotion to his name. The veteran has plenty of life in him and his current record at Cardiff is his career best as a permanent manager. He boasts a 50% win percentage, not bad for a manager being labelled as past it only a few seasons previous. 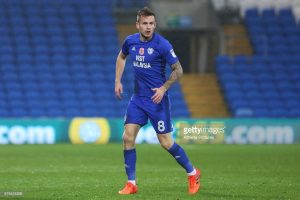 Joe Ralls has been a permanent fixture of the Bluebirds side this campaign starting 18 out of 19 fixtures.

Despite his colleague Nathaniel Mendez-Laing catching the eye in the embryonic stages of the season, Ralls has emerged a consistent talisman in this Cardiff side. He has been a wonderful asset to the defensive side of Cardiff’s game.

His defensive positioning alongside the guile he adds to midfield has been pivotal to Cardiff’s great early season form. He is a typical Warnock player. Ralls’ attributes are similar to that of Shaun Derry and Michael Tonge, midfielders which have been engrained into the DNA of Warnock’s philosophy previously.

Ralls strengths are his defensive contributions and his ability to protect the ball in physical duels due to his strength. Ralls has also provided Cardiff with goals from the midfield phase of the pitch, scoring four goals in 18 games this season.

He isn’t a player who will dictate the tempo of the game with slick passing and wonderful technique. He is a player who will opt to play a long or diagonal pass in order to simplify proceedings and develop a counterattack. A traditional defensive midfield with an eye for a tackle and a desire to battle, Ralls has been a clear standout for Cardiff this season.

He is the heartbeat in the engine room for Cardiff and someone Norwich will have to bypass in order to get attacking players like Maddison and Oliveira on the ball. 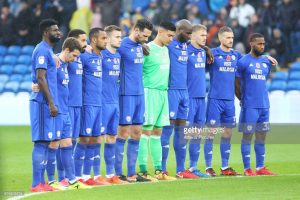 Cardiff’s success this campaign has been built from a solid defensive substructure. From relegation candidates to genuine promotion hopefuls, there is a sense of optimism growing in South Wales.

Defensively, Cardiff is constructed from the back to the front. With only 13 goals conceded this season, they boast the best defensive record in the division. Furthermore, they will defend doggedly, with two banks of four applying a zonal press whereby they shift their defensive shaping in line with the ball. Any talk of a gegenpress will be lost on Mr Warnock.

Simplicity is the order of the day for the Welsh side.

A direct passing style with quick dynamic wingers, many a football critic will point you towards a regressive philosophy. Fundamentally, it gets results and this defensive and unattractive style has seen Warnock forge a career of sufficient length.

Cardiff is a Warnock team by design. Expect a team with strong physical and mental resolve with Warnock playing the role of a pantomime villain. The simple factor is this, Cardiff will allow Norwich to retain possession and build up slow and lateral offensive chances, but when they win the ball back, they will spring a counter attack of pace and dynamism.

They have averaged 44% possession this season and sit 2nd in the division.

Can Norwich roll up their sleeves and dig in, or will it amount to another game which has fallen victim to this turgid run of form?

Norwich needs to emulate and revise their victories on the turf of the Riverside Stadium, Bramall Lane and The Madejski in order to come away with anything.

A tough Friday night in Wales beckons for the desperate Canaries.