Daniel Farke’s January signings arrive with an air of uncertainty. However, delving into Germany’s lower divisions worked with Christoph Zimmermann and Tom Trybull, so there’s no reason it can’t work again.

It was a busy deadline day for Boro, who have the opportunity to climb back into the top six on Saturday afternoon should the win and results go their way. Tony Pulis’ new signings will need to make an instant impact if Boro are to avoid falling off the pace in the battle for the play-offs.

Middlesbrough were beaten 0-1 in the reverse of this fixture thanks to a James Maddison wonder strike, but the visitors are now an altogether different proposition under the pragmatic approach of Pulis. 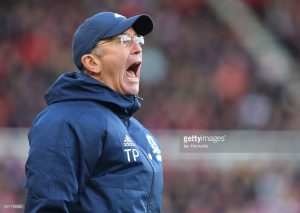 There are few more experienced operators in English football than Tony Pulis.

The Welshman has been the saver to many Premier League clubs from whom relegation appeared a certainty. Now, however, Pulis has inherited a Boro side full of potential and chronically underperforming under Garry Monk.

His work at Stoke City shouldn’t be overlooked, he was appointed when Stoke looked certain for relegation to League One, but with the loan signings of former Canary Ade Akinbiyi and Mark Crossley, Pulis subsequently completed the great escape. This is an achievement Pulis still places at the very top of his work in football.

After his removal at Stoke and a brief period in charge of Plymouth, Pulis returned to the Britannia Stadium following the takeover spearheaded by Peter Coates. It was ultimately Pulis’ brand of football which Stoke supporters became distanced and frustrated with. He is renowned for his direct style, often exploiting set pieces and long throws.

Post Stoke, Pulis has been in charge of Crystal Palace and West Brom, where he was replaced by Alan Pardew before joining the Teeside club. In the short term, results have improved with three victories in seven games as boss at the Riverside Stadium.

Undoubtedly Norwich will face a well rehearsed and well organised unit on Saturday overseen by an experienced coach who will use all of his tools to get a victory at Carrow Road. 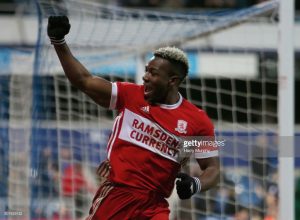 The ex-Barcelona winger has caught the eye of many this season. Possessed with blistering pace, his end product has been questioned by supporters, pundits and coaches alike after shining in the Premier League despite a severe lack of goals and assists.

Despite a slight improvement in regards to output, Traore is still an unpredictable and inconsistent entity. He can impact a game should he find end product in the final third. His threat with the cross and his capability to win free kicks in dangerous positions makes him an effective offensive player.

Traore is seemingly a resurrected prospect under Tony Pulis, and has shone against Fulham, QPR and Brighton respectively.

On the contrary, Traore’s lack of accuracy in the pass and his discipline is something which requires development and under Pulis’ expertise, he arguably has the best mentor. Traore averages two key dribbles per game and his rapid pace offers an outlet on the counter attack should Pulis opt to play that way.

The simplicity of Pulis tactical manner alongside his deployment of Traore with a more conservative full back to steady the defensive side of the game has seen the Frenchman thrive of late. 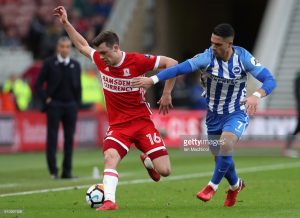 Norwich will meet a Middlesbrough side who are defensively resolute and well organised, but also full of fresh ideas under Tony Pulis.

With an improving backline and an offensive presence in the potent Britt Assombalonga, this is not a Middlesbrough side that will be defending for their lives in exchange for a point in NR1. This side is still in the embryonic stages of Pulis’ construction and is one which is transitioning from the free flowing, possession based style of Garry Monk.

Pulis has operated a 4-3-3 formation with Grant Leadbitter at the heart of the engine room alongside ex-Canary Jonny Howson and the adapting Stuart Downing. Off the ball, Middlesbrough will defend as a unit and condense the space in which Norwich has to operate but also will pose a spontaneous threat on the counter alongside supreme technical talent.

Connor: The subplot of the return of Jonny Howson and Patrick Bamford are present within this fixture, both will be keen to prove a point on their return to Carrow Road. Under Pulis, this will be an altogether proposition to that which Norwich outcame in Teeside earlier on this campaign. An interesting game beckons, and one will I think will end all square. 1-1

Jack: Norwich City desperately needs to improve their home form but it’s not going to be an easy test for them against a good Middlesbrough team this weekend. The injury doubts to Maddison and Pinto don’t help either. It’s exciting to see whether some of our new recruits will feature and the return of Tom Trybull will mean the City faithful can sleep well tonight knowing we will never give the ball away. Let’s hope Mr Howson can stay quiet for one game to help us out. I think this could be a tough one but optimistic as ever. 2-2