393 views
5 min read
Facebook Twitter Reddit Pinterest Email
A day of emotion as Norwich said farewell to a true legend and bowed out at home in the league. Connor Southwell reports on a pleasing victory for Norwich.

Forever the showman, a true entertainer and someone who perfectly balanced both old school values with contemporary technical skill.

What left is to say than, Wes Hoolahan, thank you so much.

The little Irishman was given the works, captain for the day, a guard of honour and the opportunity to play the lead role one final time before exiting stage left. When he fired the ball into the back of the net, it was almost as if divine intervention was at work. 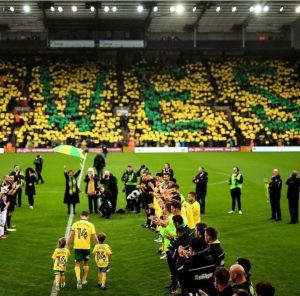 The eruption inside Carrow Road as Hoolahan’s strike kissed both posts before trickling across the line was shared across the county. The emotive connection between supporters and Hoolahan is built on the manner in which he executes his craft. Everyone who watched Wes Hoolahan will remember him, the manner in which he weaved magic is unforgettable.

Hoolahan was the last bastion of the peaks and troughs of the last decade. At Norwich City, enigmas like him are hard to come by, and Hoolahan is a celebration of technical talent. One player remaining at a club for ten years is a rarity in contemporary football and Hoolahan deserved the special treatment provided.

This was the final swansong which he would have  dreamt of and the emotion inside NR1 was palpable as City paid homage to one of their greatest ever players.

So, Hoolahan bows out with 352 appearances, 54 goals and an abundance of memories, so long, Wes.

This day signified the changing of the guard.

Hoolahan’s diminished role has been due to the emergence of James Maddison who has grabbed the gauntlet with both hands throughout this season.

Maddison’s rise into the limelight has seen him touted with bigger, more established outfits. It is looking increasingly likely that he won’t be a Norwich player come August but, for supporters, to watch his unbelievable talent has been a pleasure.

There is a degree of symmetry which has emerged, as Maddison played potentially his last game at Carrow Road, Todd Cantwell took a large step in his career with promotion with Fortuna Sittard. Is he the man to grab the mantle next season? 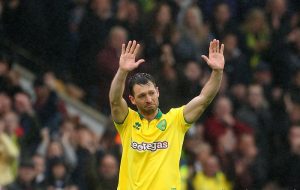 A summer of fevered speculation is going to persist around him.

The current financial climate of the club means fees are required, the underlying aim of the recruitment is to get bang for their buck, and with limited resources, there is a need for quality if the club are to progress.

Should the interest rumoured from Premier League sides materialise, the top brass at Carrow Road will be left with a decision to make. If those numbers prove irresistible, there will be a gaping hole in the makeup of Norwich’s side.

There lies a conundrum which Stuart Webber and his recruitment team will need to fill.

It’s all set to be another summer of vast change and player trading. No recruitment policy is going to guarantee perfection, Norwich must be cautious that instigating to much change could lead to another season of transition.

Only Wes could deliberately shoot with the intention of it looping up off the defender and hitting both posts on the way in. Genius. #ncfc

Furthermore, those who do arrive will require a sufficient period of acclimatisation to football on these shores. Use Mario Vrancic as a case study. The Bosnian initially struggled with the pace and rigours of the English game, but now looks a self assured and technically gifted footballer.

Vrancic has evolved and adapted into an adept performer at this level, Norwich need to source more like him if any degree of promotion challenge is to be mounted next season.

On a day whereby Grant Hanley and Angus Gunn were rewarded with accolades for their efforts this season, Carrow Road resembled a cauldron of emotion. Gunn’s Norwich stint looks set to be coming to an end, but with 50 games and 15 clean sheets in his maiden season of football, this move has been beneficial for both parties.

The romance of the narrative surrounding Gunn’s arrival was clear, but the raw talent which he possesses could see him follow in Maddison’s footsteps. Whilst a starting place at Manchester City may be beyond him, there is little evidence to suggest he would fail to play for a Premier League side.

Probably the last time we will see @AngusGunn01 and @HarrisonReed at CR unfortunately. Would love to keep both but who knows! Thank you to both of you for showing so much passion while wearing the shirt & being magnificent? #ncfc

Gunn joined Norwich as an inexperienced novice but leaves a capable goalkeeper who has proved he can operate at higher levels. What is integral now for Gunn is a sign of progression at a higher level. He is an assured goalkeeper who instils confidence when he claims the ball, an all round, contemporary keeper with a large future ahead of him.

The curtain comes down on Norwich City’s home campaign, it’s been frustrating, infuriating and made for difficult consumption for large periods. The outlook on next season is dependent on whether the individual wishes to take an optimistic outlook or a pessimistic one.

There have been enough shoots to suggest growth could be witnessed next season but also factors which could alter that outlook. In honesty, there remains a cloud of uncertainty and scepticism surrounding the approach Norwich are taking, it remains to be seen if it can fulfil the expectations of supporters.

Wes Hoolahan scores for #Norwich on his final competitive appearance at Carrow Road…..magical!

He has now scored in the league in all 10 seasons with the club.#WesPrideStory ?? ⚽️#NCFC #OTBC pic.twitter.com/79r0tIUAIM

This season has seen the fan base divided on a range of key issues, but if there was one man who could unite the supporters and inject a sense of togetherness it was always going to be Wes Hoolahan. There may never be another like him again.

Onto the next one.