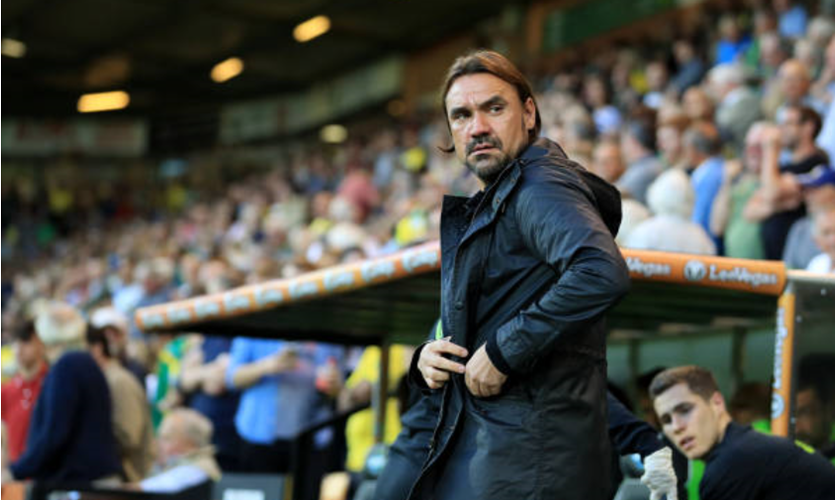 221 views
7 min read
Facebook Twitter Reddit Pinterest Email
Our build up on TalkNorwichCity.com begins ahead of the opening game of the season against Birmingham City, with James Messenger attempting to predict Daniel Farke's XI for Saturday.

It’s nearly the time that football fans up and down the country have been waiting for. In little under one week, the Betfred Championship will kick off, with Norwich heading to St Andrew’s on the opening day to face off against Birmingham.

The Canaries won home and away against the Blues last year and will want to make it three in a row as they look to begin their 2018/19 season in ideal fashion.

Pre-season has given us some indication of how Daniel Farke is likely to set up, but there are still so many positions up for grabs heading into the opening round of fixtures. With that in mind, here is our predicted starting XI for the Yellows’ trip to the Black Country.

It only seems logical that the club’s most recent signing will be in-between the sticks, come 3pm on Saturday. Krul has a wealth of Premier League and Championship experience and clearly possesses the technical ability that Daniel Farke so desperately desires.

As Remi Matthews gets set to depart for another loan stint elsewhere, with Farke expressing that he needs to work on the finer aspects of his game before becoming the club’s number one, the odds are now firmly weighted towards Krul starting for City, with Michael McGovern acting as back-up.

Many fans might have expected Ben Marshall to be playing higher up the pitch when he first arrived at Colney, but it seems that Daniel Farke sees him as a long-term option for the right-back berth.

Marshall has been impressing so far in pre-season, most notably with his performance against Luton where he earnt a penalty and also assisted Teemu Pukki with a pinpoint cross. If the 27-year old can combine his attacking flair with some defensive steel and aggression, he could be a huge player this year for the Canaries.

It is obvious by now that Norwich’s defence is ten times stronger when their newly-appointed captain lies at the heart of it.

Hanley is a crowd favourite and gives his all for the benefit of the team, regularly putting his body on the line to prevent a goal-bound shot or snap into the opposition with a crunching challenge. I’m sure all City fans would be immensely surprised if the Scot wasn’t the first name on next week’s team sheet.

With personnel changes across the park, the sight of 2016/17’s regular centre-back pairing at St Andrew’s will add some composure and familiarity to proceedings.

Klose isn’t immune to the odd lapse in concentration, yet he is comfortable with the ball at his feet and is crucial for Norwich’s gradual progressing into the final third of the pitch. With Christoph Zimmermann and Ben Godfrey also options at centre-half, Klose knows that he needs to have his best Championship season if he is to become a regular starter.

This is perhaps the most interesting selection choice, with no-one really stamping their authority on this spot going into the new season.

James Husband is one option but hasn’t had his greatest pre-season, while we haven’t seen anything from Jamal Lewis since Sheffield Wednesday on the final day of last season, with Farke admitting that he and Ivo Pinto are unlikely to be involved at Birmingham. Marco Stiepermann has made it clear that he wants to fight for a spot in his preferred position of central midfield, so that leaves Max Aarons.

Aarons has followed the same path taken by Lewis and clearly has serious potential. He has electrifying pace and has shown confidence and composure far surpassing his years. Despite being a natural right back, the 18-year old has taken well to playing on the opposite flank and, despite never making a first-team appearance, should be considered as a credible opening day option over Husband.

If Daniel Farke’s passing philosophy is going to work well this season, the ability of Tom Trybull to spread the play from side to side and avoid being caught in possession is going to be paramount.

The German has been a top performer in pre-season and looks a surety to start in the holding midfield role against Birmingham. However, Louis Thompson’s return from injury will feel like having another new signing following two years of injury woes. He has also shown that he has all the right ingredients to push Trybull all the way, so the battle over this shirt is likely to have many ebbs and flows over the course of the campaign.

Expect Teemu to alter his position depending on what formation Daniel Farke chooses to play. If a 3-5-2 is deployed, he will become one of the two strikers, possibly playing slightly behind the other front man, while his home in the preferred 4-1-4-1 seems to be on the right-hand side.

The Finnish international will push high and get forward at every opportunity; in addition, expect the Canaries new man to cut inside and try and get his name on the scoresheet. If Norwich want to mount a play-off push, having Pukki racking up goals and assists throughout the campaign will be a must.

Kenny McLean was something of an unknown quantity when he arrived for pre-season, but his performances over the last three weeks have proved why he was a bright future in yellow and green.

Aberdeen fans were nothing but positive about their former man, who bagged 8 goals and 5 assists at the Dons last year. Norwich have been screaming out for their midfielders to start contributing more on the goal-scoring front and perhaps their new Scottish acquisition fits the bill perfectly.

Looking back, the ability of Stuart Webber to secure the transfer of Leitner back to Carrow Road on a permanent deal has to be commended. He was clearly the man that Daniel Farke wanted, and he will be delighted to get his man.

If Leitner is to make an impression on the team this year, he needs to realise that he won’t be afforded as much time on the ball as he may have had in Germany. Too often, the Norwich midfield were caught in possession last year, and they need to be cannier with the ball this time around.

However, if the 2013 Champions League finalist does manage to quicken up the play, show increased aggression and chip in with some goals and assists, he could be a pivotal figure in 2018 and beyond.

Onel Hernandez has been the player of pre-season and should rightly start on the opening day. He has been electrifying to watch and has provided the team with some serious go-forward.

The Cuban seems to have been working on his finishing during his time off and that will benefit the team massively. Previously, he has shown the flair and energy but lacked composure in front of goal; maybe that will change as he embarks on his first full campaign in Norwich colours.

His move seemed a long time coming, but now it has finally happened, Canaries fans will be praying that Jordan Rhodes is fit enough to lead the line on the opening day.

Their new man is a poacher in front of goal and notched against both Union Berlin and Charlton in pre-season. Now, the key for the Canaries is to get their new man performing like the Rhodes of old, following two torrid years at Middlesbrough and Sheffield Wednesday.

An injury scare away at Luton has fans and coaches sweating, but it seems that, all being well, Rhodes will be ready for the big kick-off. Daniel Farke has been crying out for a prolific 20 goals-per-season striker; in Rhodes, he may have just found his man.