Re-lace the boots, dust off the shirts and seek for an ounce of fitness.

On the 20th May, this will be the routine of an abundance of Norwich City legends as they face Inter Forever in a match to help raise funds for the latest CSF project The Nest.

Carrow Road will be a cauldron of nostalgia as supporters will indulge on some of the finest to ever don yellow and green, as they face an Inter Forever side inundated with title winners and world champions.  This is a fixture that will be marking 25 years since the Club’s memorable 1993 UEFA Cup run which culminated in a defeat to eventual winners Inter Milan.

Inter Forever are bringing a glittering ensemble to Carrow Road that includes the likes of Jurgen Klinsmann, Marco Materazzi and Javier Zanetti.

Norwich City have announced in the recent days that then manager Mike Walker will return to the home dugout with backroom staff including Ian Culverhouse and Tim Sheppard, all of whom played a part in the 1993 European Cup run in different capacities.

Complementing players like Bryan Gunn, Darren Eadie and Chris Sutton, members of the 1993 squad, are players such as Darren Huckerby, Grant Holt and Adam Drury who are associated with an altogether different era.

Undoubtedly fitness will be a testing issue for the retired pros, which is why a younger contingent of players is important in the Norwich City Legends side.

“I guarantee I’ll be relied upon, but we’ve got a few younger ones, Holty’s younger than me, Crofty’s coming down and Adam Drury’s not that old” Huckerby added “We have got a good mixture of young and old players. By young, I mean players in their 40’s”.

“Let’s see what they’ve got, its different now. Let’s see if they can still run and still play the game. I’m looking forward to it.”

Darren Eadie talks to TalkNorwichCity.com about his involvement in the fixture

For Darren Eadie, this commemorates a competition in which he made his senior debut for Norwich City when he came on as a sub against Dutch side Vitesse Arnhem.

“I’m really excited. It was a huge part of my career, it was right at the start. To play teams like Inter Milan is fantastic.”

“For me in particular, my two girls have never seen me play for Norwich, so for the fans and for my family, it’s important to show them how important a moment it was for me. To be back at Carrow Road and face Inter Milan is a dream come true.”

It’s not only ex-professionals who will be gracing the hallowed turf on the 20th May, Grant Holt’s days as a pro footballer are far from over. Holt has had many memorable moments at Carrow Road, and admitted it was a special place to play football.

“It’s always nice to come back. I always enjoy playing and getting out there, especially on this pitch. It holds fond memories” said Holt. “It’s a fantastic thing that everyone is doing, it’s great for the community, it’s great for Norwich and it’s great for the lads coming back. I just hope people come down and take it for what it is. We want to show everyone what we can do.”

“It’s a great opportunity for dad’s to bring their boys to show them who they use to watch.” Holt added “I think it’ll be more competitive than people think. I think it’ll be a decent game”

“If people want to watch some of the best players to play football for Inter Milan, they’ll be here”.

As the game draws closer, more legends are set to be announced for both sides, with the latest additions being ex-Canary defender Darren Kenton and goalkeepers Scott Howie and Mark Walton.

Kenton played 158 times for Norwich scoring nine goals in a seven association with the club, Howie a graduate of the Canaries youth system and Walton, who made 22 appearances for the Canaries, although he was primarily Gunn’s understudy. .

Find out more about the Build the Nest campaign at thenest.org.uk. 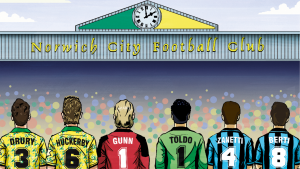