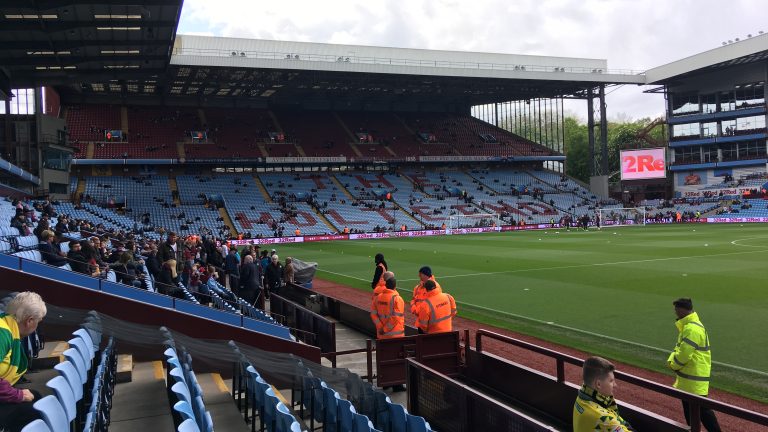 Facebook Twitter Reddit Pinterest Email
Norwich City are Champions. Those words will not become tiresome for the next few months. Head of TalkNorwichCity.com Connor Southwell rounds off the 2018/19 season by witnessing the Canaries lift the ultimate prize at Villa Park.

After 46 games, plenty of emotion and an endless amount of dreaming, Norwich City’s coronation as champions of the 2018/19 Championship season was confirmed at Villa Park.

This young group of unfancied operators have been moulded together to play in a way which Championship specialists wouldn’t have thought possible. Any rulebook devised on the methodology required to win promotion from this division ignored, rebellious Norwich City claimed their crown in a ground dripping with history and pedigree.

Yet, two years ago, this was a football club completely directionless and threatening to stagnate in the Championship.

Suffering from a hefty hangover after relegation, it was a period whereby individuality rather than togetherness was rife, and an inflated wage bill was attached to a football club gasping for air. Yellow and green were merely the colours on the shirts; there was no bigger picture or innovative plan to restore hope to the football club.

Struggling, they sought for inspiration.

Sick of conforming to the conventional set of rules, this club instead decided to puff out its chest and harden its interior. Away from egos and onto collective responsibility, from hiding to being willing to be brave and responsible. In short, Norwich City transformed into a club who could not only stand on its own two feet but can run a marathon.

To be given the shirt, you have to warrant it. No longer do reputations or past achievements carry enough weight to mean guaranteed selection. Personalities are influential but equally, ensuring an unwavering commitment to the group and recognising the higher importance the badge on the front holds compared to those letters printed on the back.

Defining this group will naturally lead you to terminologies such as togetherness and resilience, but ultimately it will be talent that will be the legacy left by this group. Encapsulated by their final goal of the season through Mario Vrancic, they have played pulsating football throughout, football that means that step into the Premier League can be one taken with confidence and fearlessness.

That bond between player and team is more profound than ever before. This isn’t a promotion build on individual talent or personal ambitions but as a cohesive collective with everyone all determined to excel for their colleagues. That is the nature of what has been constructed by the major protagonists inside the heart of Colney.

From bucking the trend to setting it.

The nature of this promotion will see other teams attempt to copy the Canaries model. Tony Mowbray has discussed it; many other clubs will be asking why they can’t replicate Norwich’s success. Ultimately, emulation is the highest form of flattery. Whether or not that translates in a regular stream of success for Championship clubs will be intriguing to consume.

Underpinning Norwich’s surge is a set of principles that both Stuart Webber and Daniel Farke possess a sincere believing within.

Initially, Farke was told that critical operators would be sold, and the wage bill reduced dramatically. This was the backdrop that accompanied the German attempting to implement a set of regimented working practices and raising the standards but equally inheriting a squad who, ultimately, failed under Farke’s predecessor. Hindsight reveals no real surprise at the lack of momentum witnessed last campaign.

Unlike most, they opted to search within their academy, extracting talent and providing education within first team football. To select to play those operators displays courage but to continue to coach and individually improve them is more impressive.

They’ve, to much fanfare and scepticism, opted to rid themselves of stalwarts and nous, injecting, instead, the first team with youthful exuberance while trusting in astute recruits from abroad.

Together, this concoction has been riding upon Farke’s magic carpet to the Premier League. Unfancied by some, written off by others, they’ve been handed a shirt emblazoned by the infamous Canary and told to dream big. They’ve encapsulated the dreams held by a city and played a style of football that’s vibrant.

Delia described this new construction of her beloved club as resembling a family.

Whether that be on the terraces or the pitch, there’s a bond so genuine and profound shared by this group. They’ve been forced to display fortitude but have also required the mental strength to stubbornly ensure they kept grafting despite hysteria within some parts. Hand in hand, as is the lyrics in the adopted remastered terrace version of Blur’s Parklife, they will stroll into the Premier League devoid of fear but keen to ruffle some feathers.

Courage is the new buzzword.

No longer are they following rules or throwing money needlessly only to leave themselves with burnt fingers. Instead, they are gracing the Premier League with vibrancy and optimism. It’s a venture will see a run of defeats, the odd hiding but equally, has the potential to be a lot of fun.

As supporters, as football lovers, days like Sunday are to be cherished in your bank of personal memories and taken to the grave. Rarely does a moment of pure euphoria arrive. Webber and Farke’s plan has flowered into something memorable for everyone related to Norwich City. Monday will be an immense day of celebration where a city will embrace everything yellow and green.

In the away end, stood families and generations of supporters sharing this moment.

Fathers and sons, mothers and daughters stood united wrapped in yellow and green paraphernalia worshipping a group who have provided so much joy over an extended period this campaign. As the trophy was lifted to the sky, it provided a timely nod to those Canaries no longer with us. This title win is being celebrated by, for and with them.

The last few seasons would have been enough for anybody to self-doubt or question their reasonings for committing themselves to this game. Supporting a football club is an experience that evokes every emotion, for better or worse, and leaves you feeling part of something greater that allows you to exist in a sphere free of judgement but equally, understanding as to the collective feeling surrounding the side.

Against the status quo, Norwich has restored themselves. Farke and Webber had the vision to build a football club from the ground up, ensuring it has an identity and upward mobility it so severely lacked upon their arrival.

Now, they will play in the biggest arenas against the biggest names with another dream becoming the next ambition. They did it. They only went and did it.

A huge thank you to everyone who has read these pieces all season. 46 games is a slog but we got there, and what an end result. I appreciate all the support and I look forward to another year of these pieces, this time coming from the Premier League!