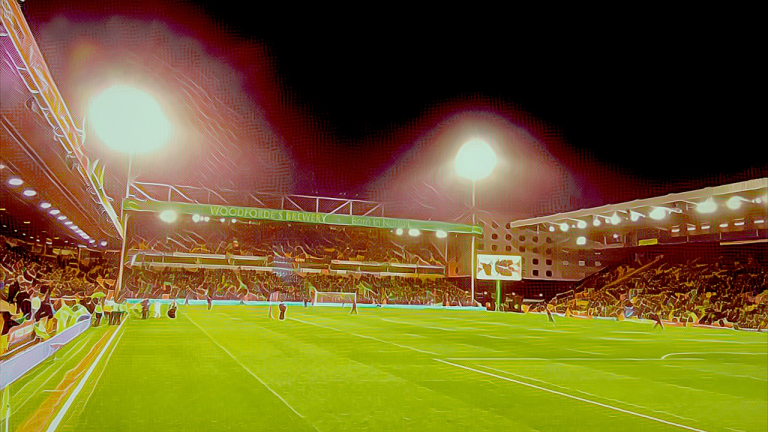 As the rain poured down at a sodden Carrow Road, Norwich City placed another significant marker on a card that is looking increasingly promotion-worthy.

Textbook this was not, the hosts had to graft and scrap in an encounter that was tactically intriguing throughout. With ten games remaining, every fixture currently feels more seismic than the one previous, but to extend the gap between themselves and Sheffield United to seven points ahead of Saturday’s roster piles the pressure upon the chasing pack.

Given the unrelenting nature of the Championship, expecting them to perform every week is simply unrealistic. They will drop points and lose games, there’s an inevitability about that. However, managing moments of adversity and responding to burning questions consistently is what will ultimately win promotion for the Canaries.

Big moments delivered by special talents are also pivotal as the Championship progresses into the crunch period.

Like the weather, however, for extensive periods Norwich were somewhat off-colour.

Credit must be attributed to Swansea City, who tactically restricted how Norwich functioned in the opening exchanges. Norwich’s full-backs and the manner of which they are deployed is critical to their operations. Swansea nullified the threat provided by young Max Aarons and Jamal Lewis by deploying two high wingers to keep them occupied.

Seizing control from a disjointed Norwich pairing in midfield allowed them to retain possession and move the ball with purpose. Their overloading of the middle phase was impressive and their composure in possession reinforced their quality on the ball.

Norwich’s press was fragmented. Several operators closed the ball as a collective but few beyond them aided proceedings. There was an unbalance about how Norwich operated and whilst Swansea never threated offensively, they did perform astutely in their tactical approach.

Graham Potter’s men looked like they’d taken huge strides in comparison to how Norwich swept them apart in their trip to the Liberty Stadium in November.

In that fixture, it was a case of the Swans beginning brightly before capitulation due to a series of individual errors. The issue of potency wasn’t simply due to Ollie McBurnie’s absence but rather the lack of cohesion between a fluid, dynamic and capable front three. As Dan James drifted wide, they lacked a midfielder supporting the play to cover his position.

The comparisons between Potter’s Swansea and Daniel Farke’s class of 2017/18 are rife. Providing they can maintain the core of their group, there is no reason why Swansea can’t make a push next season. After all, it often takes two seasons of work to reach the summit of the division. The quandary behind the scenes does require tidying though.

Norwich’s midfield combination of Kenny McLean and Tom Trybull isn’t baring the fruit that many had hoped it would.

Both seemed to operate on different wavelengths for much of this fixture. Working in conjunction is a necessity for central midfielders, yet the spacing between the respective positions of Trybull and McLean both in and out of possession is too great.

Simply, the pair lack the understanding to operate efficiently as a partnership.

McLean seems to want to position himself in a more advanced position, often he is attempting to lead a press, exposing space in the central area. To concede control of the midfield against a side attempting to replicate your style is nothing short of criminal.

Moritz Leitner and Mario Vrancic are waiting in the wings, given the quality of those operators, many will expect at least one to be named in the starting eleven come Wednesday. Nonetheless, a problem that requires a solution; rapidly.

In the second period, Farke did tweak things tactically, creating an equilibrium that wasn’t present in the first half. Pukki dropped in a lot more and Onel Hernandez held his wide position in a more accomplished way. Hernandez is an enigmatic figure, one whose unpredictability creates an exciting dynamic for Norwich’s offensive phases of play.

In terms of pressing, it was more collective but less frenetic. The Canaries were aggressive but disciplined in their harassment of the Swans in the second period. That first period was disjointed, and the visitors managed to break the press on multiple occasions.

Farke spoke of the hosts holding their nerve, this was as nervousness that embraced both Carrow Road and the team. Regaining control in that middle phase was pivotal. Personnel wasn’t the sole issue but rather the manner of their pressing. That allowed Swansea to assert that dominance, but the midfield partnership is severely disjointed.

Norwich needs a greater degree of midfield control and Farke does need to revert to one of the operators who has proved so successful in this season.

That effectiveness in the press wasn’t one which focused on penning Swansea into deep, defensive positions but one that stood off more and focused on interceptions. That provided the Canaries with more structure off the ball.

Rarely do these analysis’ feature breakdowns of goals, instead, themes and rhythms get highlighted.

But then, not all goals are scored by Emiliano Buendia.

The Argentinean pocket rocket has displayed the plethora of talent he possesses on a number of occasions this season. Sometimes, you require individual moments of quality to get points. Buendia has proved himself capable of producing such moments but supporters were yet to see a real match-winning creation from the 21-year-old. Timely.

His tenacity is pertinent for all to consume, his defensive contributions are excellent, and his work rate is tireless, Buendia is some operator.
Those who occupied the corridors of power were excited by his arrival, so much so they pushed the button in January 2018 to ensure they secured his services. Everyone has been waiting for this moment, and what a moment.

Forget the technique and power unleashed behind the strike and focus on the magical nature of a first touch that allowed that strike to follow.

His foot acted as a cushion as he caressed the ball past the defender, sending him in an entirely different direction. His low centre of gravity allows him to swivel his hips and create a yard of space where most would consider it impossible. Absolutely magical and a moment worthy of winning any football match.

The body of evidence staking against Norwich City is becoming increasingly more exciting.

Statistically, everywhere you look seems to draw the same conclusions, that Norwich is nearly at the finish line. Ensuring they see this job out requires a mentality that is resilient, a togetherness that is strong and quality when the times get tough, be that collectively or indiviually.

They’ve proven they have the tools in the armoury to complete the task, with the whole of Norfolk willing them across the line, now is the real test of their endurance and ability to battle.

Friday’s win was the stuff of Champions. Five more wins and this squad become immortal in Norwich City history, not simply because of the scale of the achievement but the context of it. Confidence, but not arrogance is key.