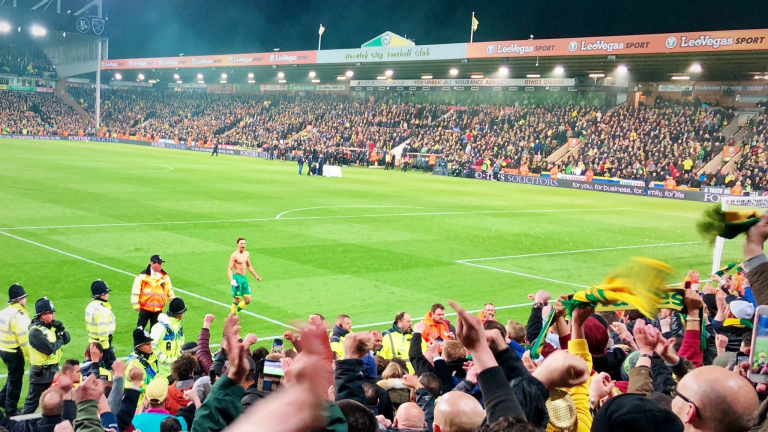 Facebook Twitter Reddit Pinterest Email
59 years to the day they last achieved promotion at Carrow Road, Norwich City finished the job against Blackburn to secure a Premier League return after a three year absence. Connor Southwell reflects on an emotional but unforgettable night in NR1

After a season of dream-like proportions, the Premier League will be a brighter place as the yellow and green of Norwich City is returning.
The scenes that greeted the final whistle were pure euphoria.

Yellow and green scarves being swirled around supporter’s head, generations of families embracing and players displaying emotion, this is what epitomises the beautiful game. Nights like this, seasons like this is what becomes so inviting as a young child. Football is about togetherness and community; Carrow Road was a cauldron of emotion.

This side has evoked emotion all season.

Be it pride, be it uncontrollable joy but predominantly, they allowed supporters to fall in love again. This wasn’t a season funded by money being thrown or wages being steep; this is something intellectually constructed by pragmatic and highly skilled operators.

Every pass has been scouted, every goal meticulously rehearsed on the fields of Colney. This journey has been about proving the impossible is possible. Norwich City defies logic in the way they’ve operated, every manual that discusses promotion ignored and every rule broken in an ascent towards the Promised Land.

They said you could not slash your budget and compete. They told us all that introducing youth and buying on the cheap couldn’t result in promotion. They said it couldn’t be done.

They were all wrong.

From Emi Buendia’s outrageous pieces of skills to the endless list of Teemu Pukki goals, this football club has risen from the ashes. Three years ago, the Premier League badge was ripped off the sleeves on their shirts after relegation.

Now they’re back. Stronger and louder than ever.

This club was spiralling out of control, apathy reigned, and money was running out. In the face of adversity, they devised a plan. Conventionally, they’d of spun the wheel again and produced a manager tasked with firing back, but then, this isn’t your standard football club. Not anymore.

In came Stuart Webber, the architect for this achievement. Odds stacked against him, he halved a wage bill bulging at the seams and set about prioritising youth development while recruiting astutely. He has often emphasised the need to be creative in their approach, searching ponds left unexplored by other sides reinforce that.

Farke resembles more of a German rocker than a football manager, but his coaching methods have led to numerous youth prospects embodying the ethos of the club and excelling with confidence and talent. Farke’s coaching of James Maddison ensured the long-term financial security of this football club, his trust in young players providing a refreshing change from the safer choice of experience.

In the face of intense questioning, but equally, in the waves of support, Farke has been unwavering.

Whether it be a 4-0 drubbing at the Den last season or a 4-3 late surge against Millwall at Carrow Road, the German’s demeanour has been one of composure and self-confidence. His football was labelled as theoretical and tedious, yet he ignored the external noise, and ole’d his way to the Premier League while ensuring he retained his own core set of philosophical values.

This is a story that shouldn’t have been possible. Forget fairytale; this is a miracle.

Talk of the circumstances off the pitch are importance to contextualise but, on the pitch, those operators who were previously unfancied, written off and sat in the footballing wilderness have been given a platform to prove people wrong. Donning the shirt now possesses a deeper meaning, the weight of playing for this club embraced by a group who want to achieve as a collective.

Norwich City is a club moving in the right direction adopting the correct processes but also retaining a belief that nobody external to the inner circle of the club predicted or witnessed.

Staring adversity in the face, this football club has embraced the challenges and thrived off the pressure in a way which has culminated in a Premier League return. They’ve defied the odds, fought like no team has dared to fight and will give the Premier League a right go next campaign.

As a supporter, during the darker periods of following a football club, you travel back from an obscure location after a deflating away defeat and stare out of the window, questioning why you commit yourself to this sport.

When moments like this present themselves, every mile, every loss and every moment of anger or frustration evaporate. This group has championed every emotion possessed by supporters and injected that into their exhilarating performances.

Saturday evening was a case of the Canaries playing the game and not the occasion.

Game management took hold in the second period, but everything felt like it was there for Norwich to grasp. After weeks of attempting to cross the line, they finally have. With the swagger and confidence, they’ve operated with all season; they dismantled a Blackburn side who displayed shades of attacking intent at points.

Ultimately the narrative won’t be surrounding the game that played out but rather the aftershocks that followed. Many will be waking up on Sunday morning with a fuzzy head and a night of memories.

For only the second time in their history, 59 years to the day they achieved the same feat in 1960, they achieved promotion at Carrow Road. Atmospherically, the stadium roared all night, bouncing from its foundations.

The scale of achievement may not be understood for years to come, but those involved have written their names in Norwich City folklore for an eternity.

Delia Smith and Michael Wynn-Jones, despite endless criticism, have stood firm at the football club but equally have overseen a sea of change that has resulted in the highest of heights after the lowest of lows. They continue to be the constant in a footballing world of chaos and unpredictability. They may not have the deepest pockets, but they have the biggest hearts.

This promotion is for them.

Supporters wear the scarves, don the shirts and love the badge for that unique feeling of community that football provides — that opportunity to be involved in something greater than merely themselves. Whether you follow from Dereham or Detroit, football connects us all regardless of age, gender or class.

This game is inclusive, beautiful and stands united when many subjects in society continue to divide us. This season has proved that dreams do come true and in Norfolk, nobody wants waking up.

For confirmation of the Championship title, Norwich needs a single point, but now it’s about enjoyment and celebration.

We’re Norwich City, and we’re on our way back.