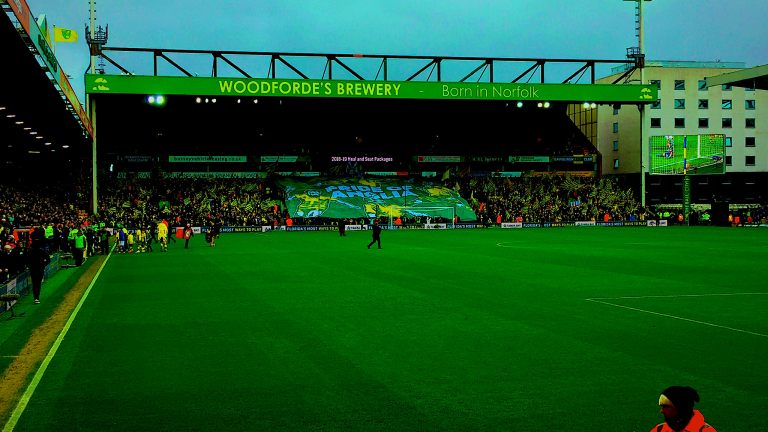 As East Anglian Derby’s go, this was one that contained numerous subplots, flashpoints and discord between two sides sitting at opposing ends of the table.

Navigating a potentially awkward Derby against an Ipswich Town side who are rooted to the foot of the Championship managed by a Canaries Hall of Famer was always going to be a test of Norwich’s promotion credentials.

To Ipswich’s credit, they displayed plenty of endeavour through some excellent phases of play but ultimately, it’s a severe lack of quality in both thirds that will dictate their fate. For all of their possession, they were toothless in the offensive third. A lack of creative ideas and improvisation resulted in a lack of output from Paul Lambert’s men.

Defensively, they were fallible, littered with individual mistakes and positional errors.

Lambert opted for a different shape, one which favoured narrowness and emphasising a solid spine in an attempt to combat Norwich’s intricacy in the final third. They didn’t adapt to their newfound formation, with Max Aarons being given the licence of Carrow Road to surge into before delivering a cross which eventually fell to Onel Hernandez to finish.

Based on the evidence provided in this encounter, Ipswich is hurtling towards League One at a rate of knots. Fight? Yes. Possession? Absolutely. Fundamentally, they are destitute defensively and struggled to create.

Prior to this fixture, Daniel Farke uttered a philosophical phase about how his side should approach the Derby heat.

What ensued was a clash between both technical areas following a rash tackle from Jon Nolan. The altercation seemed to magnify the occasion and display how both sides were fighting with passion. Whilst Lambert was embroiled in the heat of battle, Farke stood to one side, refusing to engage in the verbal’s shared between the ex-Norwich manager and Farke’s staff.

Class personified. Nothing seems to faze him. In the midst of the bedlam, Farke appeared intent to allow football to be the centre of attention rather his own ego.

The ramifications on Lambert’s behaviour may be longstanding but the cacophony of jeers that met his dismissal only verbally expressed the breakdown in respect and admiration that the Scot once commanded from the Canaries faithful.

His name is sung with the same gusto but in an altogether different context, the brazened Scot appears bitter where he once was ambitious and full of aplomb. Despite him noticeably stating he knew what to expect from the Carrow Road crowd. Lambert lost his head. He talks of members in Norfolk possessing short memories yet refuses to acknowledge the fact his employment in subsequent roles post Norwich have arrived due to the success he unearthed here.

Perhaps a lengthy retreat to the calming pink walls in the away dressing room was required in order to lower his testerone.

Carrow Road is led by a new king, however, with Farke now grasping the mantle once dominated by his Ipswich counterpart.

As a rendition in honour of the German was audible around NR1, the realisation that he’s transformed Norwich City from a club lacking structure and feeling apathetic into a genuine Championship title contender is pertinent. Recall the reverse fixture between these teams, whereby the away punters were audiably distressed by the German’s working practices.

Admittedly, Norwich didn’t discover top gear, but they possess the quality in their side to dismantle opponents with offensive quality and devastating finishing. Even in the hottest atmosphere, he’s faced as Norwich head coach, he stood on the periphery, electing intelligence over anger. That intelligence is why they find themselves at the summit of the Championship table.

Norwich City is a cohesive, progressive outfit who are purposefully maximising their resources off the pitch to construct success on it. They are open-minded, invested in their ideological processes and existing within a modern sphere whereby a collaborative approach is preferred to the conventional hierarchy that exists in English football.

They were prepared to be patient and retain belief in their project, even in the darkest of days.

From there, poor results and a divided dressing room saw the self-proclaimed new era over.  The protagonist it championed removed and a former arch-nemesis tasked with a tough job of reviving a football club looking in the mirror without a clear identity visible.

Mick McCarthy may not have constructed a side that supporters could connect with, but he did ensure safety amidst the constant backdrop of financial adversity. Lambert has created connection and injected the fun back into proceedings at Portman Road, but the reality is a lack of quality in both boxes will relegate Town.

And so, the process for a new era begins again. This time, it’ll need to be visible as opposed to simply being a PR line spun in an attempt to harvest a positive atmosphere. Talk of history is acceptable, almost understandable given the current climate, but it stands for nothing if there is little hope for the future. No trophy will rescue Ipswich in League One, only a clever structure and progressive set of methodology will do that.

Despite the two goals from and headlines for Teemu Pukki, it was Christoph Zimmermann who performed expertly.

The commanding centre back resembled a German warrior in the backline who headed everything that arrived his way, tackled superbly when required and wore the armband with authority and class. Contrast this with Luke Chambers, who was keen to get involved in fracases and altercations; comparisons are stark. Zimmermann was positionally superb and defensively intelligent. The fact Norwich recorded their first clean sheet in nine games is due to his and Godfrey’s brilliant partnership.

Worth noting that Zimmermann arrived as a player who, by his own admission, was expecting to be the fourth choice in that position. A German fourth tier player when he signed, Zimmermann has embraced the culture of the football club and is performing at the highest level in this division. He is keeping an experienced operator in Grant Hanley sidelined.

Captain Christoph is leading by example and encapsulates every characteristic that Norwich City supporters want from their players. The fact he was still barking instructions at 3-0 up reinforces his passion and commitment to the cause.

Furthermore, the magic weaved by the wands that are Emi Buendia’s feet continues to result in goals for Norwich City.

The Argentine has been displaying his class consistently this season, with individual moments that present a strong case for him operating at a higher level next season. Be it with Norwich or elsewhere. In his debut Championship season, he has dealt expertly with all that has arrived his way.

Physically, he competes with tenaciousness and vivaciousness. On the ball, he oozes quality.

Be it his weight of pass or drop of the shoulder to beat players, Buendia is a dream to consume and such a pivotal aspect of Norwich’s offensive quality. Regardless of the division Norwich find themselves in them next season, Buendia is already a player of Premier League calibre.

I can’t wait to see what #canarycall is like after today ???? pic.twitter.com/vrL5leEJDQ

The narratives surrounding this encounter were pre-written, only to be intensified by Lambert. Mental resilience was the order of the day, with a performance focused on playing football as opposed to revolving around one character.

Norwich will ultimately cast their eyes towards the bigger picture. Creating a five-point gap between themselves and 3rd place provides a cushion. They now possess an opportunity to accelerate away from the chasing pack. From here, it all feels about the end goal for Norwich City.

A decade of derby domination will be the headline and the potential of this fixture not being repeated for an extended period of time is a reality dawning on both clubs.