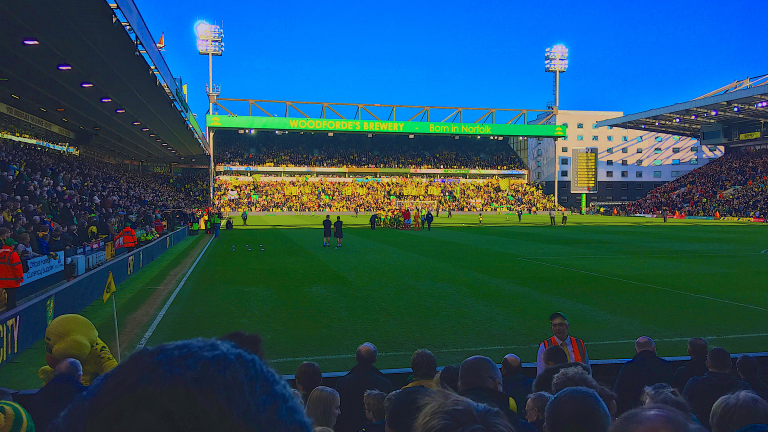 Carrow Road was a cacophony of deafening noise as the final whistle blew, as was the magnitude of this victory against Bristol City.

Let alone palpable, the jubilation was audible inside the ground but also out of it.

Forget all that has gone before, forget all that is to come; this win symbolises the moment Carrow Road let down its hair and decided to dance. The bedlam that ensued following the final whistle was a collection of pride, hope and the realisation that their destiny is firmly in their own hands.

Daniel Farke’s orchestration of the Barclay contained more passion than usual, the celebrations of the players were one that stemmed from a result achieved through determination and grit as much as good passages of play.

The atmosphere at NR1 has been electric all season, no-less because of the fine work of Along Come Norwich and the Barclay End Project but this was different. It wasn’t a joyous celebration but raw passion, one which audibly captured the common consensus in the stadium; this Norwich City side are genuine promotion contenders.

As the yellow and green warriors took the acclaim of all four corners in the ground, the realisation of what has been constructed at Norwich has firmly hit home. No longer is this an apathetic, passive and responsive football club. The keys have been given back to those who matter most; the supporters.

The adoration for those on the pitch from those occupying the terraces is rising with every game.

Relatable grafters without ego who understand the significance of pulling on the shirt, that’s this current crop. The culture that’s been constructed is one whereby supporters have been invited to immerse themselves in. They aren’t consuming a group performing well, they are involved in it.

This result could prove seismic given the current standing of the two sides.

Every time this team is left to stare adversity in the face, they respond emphatically, answering every question posed with intent.

After a first half of fragmentation, it was pivotal that Norwich provided a response that displayed their promotion credentials. In the opening twenty minutes of the second half, they operated with swagger and purpose. It was one that informed Bristol City that they were going to brush them aside with offensive quality and equilibrium that was missing in the first period.

That struggle in the opening exchanges was due to a combination of self-inflicted incidents and adept Bristol City tactics.

In recent weeks, teams have adopted, predominantly, two techniques in an attempt to nullify their quality. One has been a passive low block, attempting to limit the spaces available for Norwich’s operators to adopt. As Bolton discovered, this only ends poorly for opponents.

Those who have unearthed success is sides who have elected to press Norwich with intensity. Preston serve as a perfect case study of how to cause the Canaries problems. Lee Johnson instructed his side to harass with purpose and as a collective in an attempt to break the rhythm of the hosts.

In midfield, Norwich was disjointed in that first half.

Kenny McLean and Tom Trybull were positionally poor. McLean didn’t provide Norwich with the connective link commonly provided by Mario Vrancic or Moritz Leitner. There was a lack of communication and combination about how the pair operated, at points, their respective positions were in opposing halves.

In possession, Norwich rely on a midfielder to commit space and break the lines to play vertical passes into their front four.

Had Farke of opted to exchange one of the midfield operators, then no blame could have been associated with the German. Instead, he tweaked things tactically. Ensuring a more fluid midfield capable of asserting the footballing philosophy Farke demands with more purpose was visible. Also, they contained the counter-attacking threat Bristol City possessed in the opening period.

The second half was one where they showed their relentless method of attack, with fluid interplay and flair. Admittedly, they had to ride the punches and defend with aggression, but they did manage the game effectively.

On the evidence provided in the second half, this was a victory the Canaries duly deserved.

To be losing at half time but still attack the game in the manner they did, with genuine belief and intent embodies the character and aplomb they possess as a group. Even after the riposte of Callum O’Dowda, even after fragmentation and frustration, they persevered with their approach to ensure they did win all three points.

Search for the word character in the dictionary, the definition will cite ‘Daniel Farke’s Norwich City’.

In the opening period, his positioning was poor with more focus on occupying positions in the offensive half as opposed to acting as the link Norwich needed so desperately. His energy was infectious, evidently, he is a player keen to make a lasting impression on his Boss. With Vrancic and Leitner waiting in the wings, he knows he’ll have to be on his A-Game consistently.

This was a case of witnessing the best and the worst of McLean.

When operating, he displays shades of Jonny Howson, both his stature and his qualities are similar. As the game progressed, his performance improved.

Positionally, he performed with more discipline in the second half, influencing the play from deep whilst displaying his wide range of passing.

Undoubtedly, McLean offers a different set of tools to those currently in the Canary ranks. His bursting runs, passing from deep and tenacity could make him a useful component in the final twelve fixtures.

Thus far, his role has been one of a viewing capacity but McLean now has a front row seat and is keen to prove he deserves to drive Norwich further on.

Given the form of Bristol City and the potential ramifications should they have conjured up a victory at Carrow Road, this win is massive in securing their dominance at the summit of the table. Ultimately, whether Norwich finds themselves top of the league in May or simply in the other automated promotion spot is irrelevant, providing they secure promotion.

From here, that must be the aim.

They’ve worked tirelessly this campaign, defeating those expecting them to fall away and proving that a complex style that requires intricacy can be executed in the rigours of England’s second tier.

So much to prove and so few expectations.

Leaving Carrow Road without a smile would have been near on impossible for even the most pessimistic Canary supporter. The excitement in most quarters is reaching fever pitch and the end goal is becoming all the more visible.

All they have to do is keep their feet on the ground, keep performing to a high level and ensure the job gets done.

Whether they win promotion or not, whether they fall away or not, this season has created memories and returned smiles to the faces of supporters who didn’t recognise their football club anymore.

Progression has been found against a backdrop that refused to allow it, Carrow Road has become a cauldron of noise and togetherness when it threatened to concoct a mixture of animosity and apathy.

Currently, it feels as though a fairy-tale is being written in NR1 whereby the key themes are aesthetically pleasing football and underdogs refusing to accept their tag. This Norwich team is rebelling against the norm and its supporters is beginning to get swept away in the pandemonium that is threatening to arrive.

A quarter of the season left; one that will answer whether Norwich really is promotion-worthy. Strap in. Enjoy the ride.