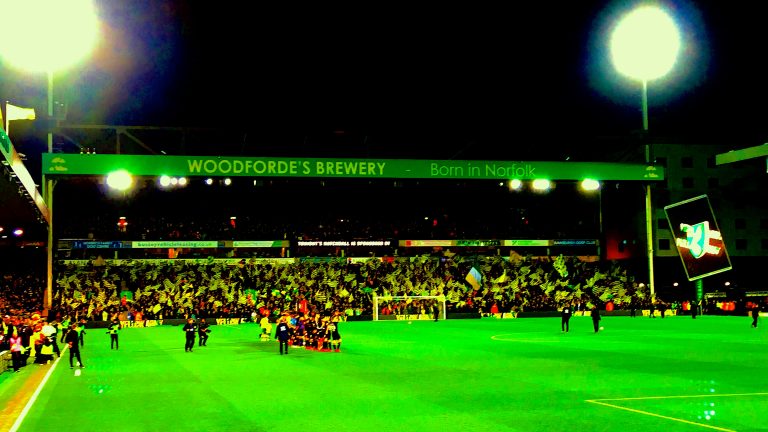 If evidence surrounding the magnitude of this fixture was required prior to kick off, then those downplaying proceedings merely needed to absorb the cacophony of noise that preceded Marco Stiepermann’s opening goal for Norwich City.

Carrow Road almost sucked it in, as was the relief around the ground. It was palpable.

Given how they negotiated a multifaceted fixture against Swansea City ahead of their promotion rivals going into battle on Friday, the nerves inside NR1 were exchanged for noise and support. As those occupying senior positions urged the supporters to be raucous and proud, it’s safe to say those in the terraces duly obliged.

Considering the complexity of this game for periods, those supporters were needed to drag their team over the finish line.

The proximity of the scoreline doesn’t reflect the nature of the game. Despite City operating expertly at points, they were the victims of their own downfall at others.

In periods, Norwich were scintillating; oozing confidence, combining cohesively and managing the game with professionalism. If Swansea was a case of the Canaries being slightly off-colour, then this was quite the contrast.

Particularly in that opening period, they resembled a cat, stalking and tormenting their pray. As was the nature of their dominance.

Accelerating towards half time with the scoreline at 2-0 to the hosts flattered Hull. Nigel Adkins opted for an approach that allowed the Canaries to assert their ideological game plan onto proceedings. Hull suffered a fate similar to that of Bolton, most recently, and countless others, in Norwich gaining momentum and picking them off at will.

Had David Marshall not have been present, the damage could have been beyond repair.

Norwich crafted offensive phases of play strategically, with a combination of passes breaking the lines and an intelligent collective press resulting in opportunities. Adkins and his team really couldn’t have complained had they of been on the end of a more emphatic scoreline at half time. Slick, fluid and magnificent to consume at points.

But then, that has been Norwich City’s definition all season.

Yet these column inches are to be filled once more by a Tim Krul error.

The nature of his goalkeeping and some of the mistakes he’s been the guilty offender of, course  are there to be consumed by all. This is another to add to that list. Quite simply, a misjudgement in regards to how much time he possessed leading to mass panic. If a similar error wasn’t enough of a warning shot on Friday, this certainly proved to be.

He has been an improved figure since his rustiness in the opening weeks was exposed, not merely as a goalkeeper but as a commander of a young, inexperienced backline.

Distribution has been a flawed area of his game since his arrival, but for every weakness, there are dozens of qualities. Discussions surrounding whether he’d be sufficient enough for a season of top-flight football are futile given that Norwich is yet to get there. He should command respect; his stewardship has allowed Norwich’s young defensive line to mature quickly.

Krul needs to educate himself over the potential ramifications this slip up could have created – thankfully for all parties, it didn’t. The unnecessary heckling every time a pass arrived his feet was pathetic. Krul has been a mainstay in a side residing at the top of the league, one which could end up as champions.

Understanding why the ball needs to be recycled to critical to realising why the ball is with Krul so frequently. Naturally, moving the ball back is still met with the odd groan inside Carrow Road. He is important because he is always an option. Consider him a reset button. If there no opportunity to work an opening, then press the button and attempt to construct a new phase.

His error will get highlighted but discounted will the times he distributed successfully and helped the players play their way out of situations.

Norwich creates counter attack situations by inviting pressure and possessing the confidence to manipulate an opponent’s shape. There are times for a more direct punt up-field but often that results in a turnover.

Mistakes are there to be learnt from, not ridiculed over until another man comes in. It shouldn’t define a player who has performed adequately this campaign.

Their weakening performances in the closing embers of games at late are a result of mental fatigue resulting in poor judgement. Operators on that bench currently have no more than a watching brief, whilst those on the pitch fatigue. In a winning position, why not introduce those operators to give them minutes when they are in a position such as the one they had in this game?

Pre-scripted substitutions on the 80th minute merely prolong the fatigue and extend the rest period required by the 11, all whilst not allowing those on the sidelines to discover a momentum.

Norwich may rely upon one of those players to produce a moment that decides a crucial fixture or rescue a point to keep the promotion charge going.

Farke needs to be more spontaneous with his substitutions and use them in a way to ease the pressure off the first eleven.

In every squad gunning for a promotion, often there is a footballer whose individual talent pours out to the masses.

The 22-year-old is the instigator of all that is positive about the Canaries interplay and offensive passages of play currently. His moments of individual quality, of which there are many, are resulting in points for Norwich City.

It will be the outrageous flick leading up to his second goal of the evening that will be acclaimed, yet it was his all-round performance that should be highlighted. The manner in which he leads Norwich’s press with intensity, the way in which he is always demanding the ball but equally, the niche things, such as the way his body shapes invites fouls by opposing players.

Offensively productive but also applies his tenacity and work rate to his defending equally. This isn’t a player who desires headlines and personal accolades, but one who shines in a team competent and confidence.

He is the difference maker, given the season is reaching its crescendo, those operators and moments are critical.

And so, attentions turn to Elland Road for a showdown between Leeds and Sheffield United that could set the dynamic for the remaining fixtures beyond the international break. Ultimately, Norwich needs to complete an altogether different task at Rotherham with the hope that they come away from the New York Stadium in a healthy position.

Quite simply, Norwich is one of a possible three who would claim an automatic promotion spot and achieve something that appeared to be beyond the realms of possibility at the beginning of the campaign.

Regardless of what happens, this is a period whereby fear of failure should be replaced by support and encouragement.

Once again, this side has stood up and been counted in a situation that posed different challenges, once again, they respond. They’re nine cup finals away from becoming immortals. With every passing week, the reality is setting in.

This is as cultured a Norwich City side in terms of the stylistic makeup of their play, as we’ve seem. They possess technically dominant operators and are underpinned by a togetherness felt throughout the club.

There is a mantle to be grabbed, they have one hand upon it. Time to make it two.