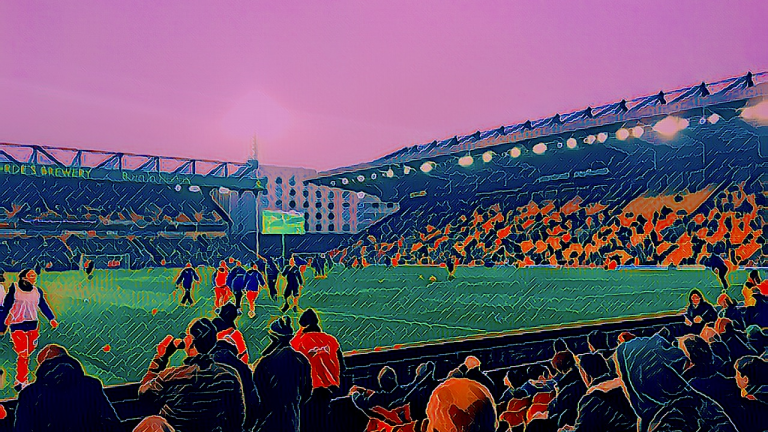 Pandemonium, ecstasy and sheer bedlam, Carrow Road was shaking to its foundations as Norwich revived another fixture to extract points when all seemed lost whilst extending their unbeaten run.

It seemed inconceivable, Norwich has experienced numerous hurdles being placed in their path and, to date, they’ve overcome the vast majority.

But this proved to be the biggest obstacle yet.

They’ve been the divisions greatest escapologists but even by their own standards, this appeared to be a situation tinged with improbability.

The nature of this comeback felt somewhat different, in part due to the unlikeliness of its completion but also because of the raging injustice the hosts experienced due to some questionable decisions from officials and antics of Forest’s operators.

Norwich’s operators care not for the odds being stacked against them. There is an intangible force currently guiding the Canaries and finding alternate methods of locating points is proving an invaluable quality, even with the backdrop of improbability.

Even without major protagonists and the increasing adversity this fixture produced throughout, Norwich’s togetherness and self-belief saw them through. This was not a direct and hopeful last period as Norwich searched for scraps, they reiterated their work of playing through the thirds in an attempt of working opportunities.

For some, this would have been their first ever Norwich City fixture and what a way to begin a unique love affair that lasts a lifetime. In terms of entertainment, this fixture possessed everything but the heart rate of those packed into Carrow Road and the repeating pulsating conclusions to fixtures is becoming dangerous to the health of supporters.

If they continue to produce comebacks even those in Hollywood would have struggled to weave into a blockbuster film, then the Canaries are really on the verge of becoming immortals.

Some will associate it with luck but brandishing these late goals and fighting comebacks as coincidence are merely doing them a major disservice.

They are fitter than most, sure, but it’s the fact they retain their approach. Never do they resort to direct, hopeful balls but simply stick to attempting to force the issue through their possession.

Brandishing this as luck is expected from the outside but luck allows you to create these moments once or twice a season; Norwich is doing it consistently.

Recollection of City sides from yesteryear results in differing epochs remembered for a multitude of differing reasons.

For Lambert, the late goals and unpredictability, for Hughton, the pragmatic approach to his football, one which was the direct antithesis of his predecessor and for Farke, this team will be commonly associated for producing moments of late drama whilst possessing the biggest heart. Fighting spirit.

One can only wonder what approach Hughton and some other managers would have opted to take.

The final score merely scratches beneath the surface in a dramatic Boxing Day clash. Forget post-Christmas blues, this was an epic encounter whereby the pendulum swung throughout.

Norwich dominated a first half whereby Forest were the latest to subject themselves to extended periods of the Canaries possession and chance creation. Had it not of been for the limbs of Costel Pantilimon, then it could have been Forest who had to produce the comeback.

Max Aarons’ concession was responsible for the opening goal.

Yet, the manner in which a number of operators ran to console, encourage and reassure the youngster is proof this team holds a bond stronger than simply wearing the same coloured shirts. What has been constructed at Norwich is a genuine feeling of collective; one united, cohesive unit all pressing behind the same cause.

Aarons has been incredibly impressive since his emergence into the team, his inexperience was exploited on this occasion, but his response was incredible.

Nottingham Forest themselves proved a tough proposition for Norwich to overcome.

Aitor Karanka’s approach was similar to the one he adopted with Middlesbrough. It stems from building a solid foundation defensively and ensuring that, fundamentally, they don’t lose fixtures. That’s to be expected from a coach whose education came under the tuition of Jose Mourinho.

When Forest sought to play, they looked an impressive outfit capable of dismantling defences and creating numerous opportunities. Clinical in front of goal, runs from deep and an impressive goalkeeper, undoubtedly, Forest is an efficient side but that’s to be expected considering their financial muscle power.

However, their approach seems restrictive, should Karanka be replaced, a manager who allows his side to play with more offensive freedom will perhaps be on the agenda of those who occupy the corridors of power at the City Ground.

The outrage surrounding the amount of added time is bizarre from a Forest perspective.

Pantilimon consistently ran down the clock, Forest opted to play catch between themselves prior to taking a throw-in, once you add onto that the time of Emi Buendia’s injury, you’ll find yourself close to seven minutes.

The way Norwich are leaking goals at present will be a cause of concern for Daniel Farke.

There’s a youthful make-up to the current reargued, and with that, there is always going to be concessions and inexperience because that’s a critical part of development. Norwich recorded a clean sheet last week and have proved they possess the capability of beating sides in an ugly manner.

Naturally, they need to improve their defensive shape and ensure they can defend second balls with more awareness and aggression, but these are minor faults on a side who are proving they can ride punches and land some of their own.

This festive period and the mounting injuries Norwich are currently enduring will result in those on the fringes being presented with opportunities. In Mo Leitner’s absence, Mario Vrancic will be given a chance to prove he can fill the void left by the influential German midfielder.

Contrasting Vrancic’s performances from the last campaign with this current one is stark.

His range of passing and technical quality has always been unquestionable, but his physicality coupled with the fact that the pace of the division caught him unaware last campaign. He is now becoming quite the operator, capable of influencing games at Championship level with some aplomb.

Farke speaks about taking players to the door, and Vrancic is a prime example of what could happen should you opt to walk through it.

Make no mistake, from here until early February, Norwich have a season-defining run of fixtures. For different reasons, they are all, individually, challenging. Should Norwich emerge post-Ipswich unscathed, then there is the evidence that this season could be one which ends in promotion.

If they sustain these late surges and continue to defy the odds, then they will take some preventing.

Farke’s constructed a side with fight in abundance with a footballing intelligence to match. To opt to send on two strikers and change the shape to be more expansive illustrates Farke’s constant flirtation with risk; something he encourages.

Frank Lampard’s Derby County is another pivotal game for Norwich, hopefully, we can all get our breath back and stop jumping on photographers before then.