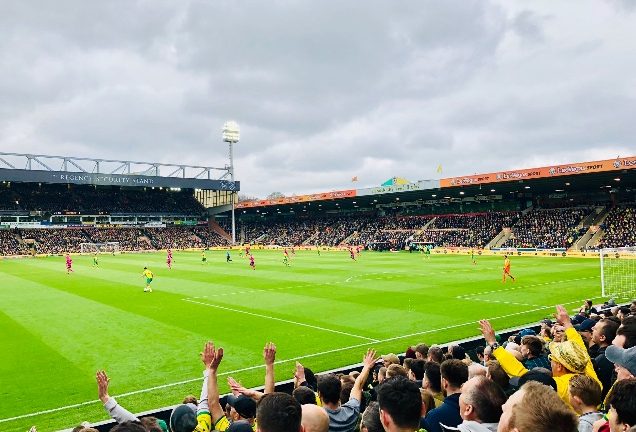 Whenever constructing an article discussing the exploits of Norwich City this campaign, it’s difficult not to engage in hyperbole.

In some regards, that’s the highest compliment you can award them.

This fixture proved to be a routine afternoon whereby Norwich could flex their promotion credentials through some sublime passages of play. Any nerves those operators possessed prior to kick off weren’t evident as they took to the field and dismantled a managerless QPR with some aplomb.

Any regular consumers of the Premier League will witness how Manchester City brush aside those sides regarded as lesser in both quality and stature. The gulf in class was visible, particularly in the opening exchanges of this fixture. Norwich was manipulating QPR’s defensive shape but also controlling the game out of possession.

It was pure domination, from the opening whistle until the interval.

Without a doubt, this was one of the purest performances from Norwich City at Carrow Road for some years.

The manner in which they moved the ball with purpose, playing through the thirds almost effortlessly, was excellent. Orchestrated by Emi Buendia, they took QPR to the sword, playing intricately out of tight spaces but also occupying positions that allowed them to cause havoc offensively.

Off the ball, they worked as a collective in their pressing. The way they strangle their opponents while in possession ultimately causing the visitors to concede possession at regular intervals is sublime. Reference Teemu Pukki’s opening goal.

Admittedly, QPR were dire for prolonged spells with their defensive ineptitude a contributing factor in an impressive win for the Championship leaders. In the end, they were fortunate to be on the receiving end of only a 4-0 drubbing as was the nature of their performance. Defensively disorganised and lacking the possession of any noticeable quality, they could be frantically looking over their shoulder in weeks to come.

Their 25th league win of the season, they sit eight points clear of Leeds United in 3rd and stand eleven points away from the Premier League.

You are going to believe them, Norwich City are heading to the Premier League.

Attentions have moved away from simply securing promotion. Now, it’s about ensuring the title is clinched too.

‘We’re going to win the league’ was the chant that was audible from the terraces in what is a dramatic shift of expectations. That prophecy is difficult to disagree with; the divisions best side are marching towards the league title.

Currently, they are the best side in the Championship and Saturday was another example of them at their glowing best.

Discussion of them not being in top gear in recent weeks has evaporated.

Norwich combined aesthetically pleasing football but were also effective in the way they created opportunities. That attacking foursome creates overloads at will but also possess the cuteness and technical ability to carve teams open.

It’s not merely the talent they have but also the relentless nature of their play both in and out of possession.

Individually, they possess some wonderful talent, but equally, the way they operate as a collective is scintillating. They are displaying their remarkable surge of consistency; Daniel Farke is continuously picking the same side but also producing the results to support that decision.
Norwich was the far superior outfit throughout.

Cohesive, composed and commanding within their purposeful passages of play underlined the pertinent quality between the two teams. It feels as though the most excellent of seasons is finally meeting the chequered flag as it approaches its final lap.

As Farke stood with his arms aloft in front of his adoring public, the message from all concerned was palpable; let’s finish the job.

The expectation is rising in NR1.

In this promotion race, Norwich has been imperious, matching every challenge with a suitable response. Sometimes it has to be substance over style, but they have proven they can win in pressurised situations. They have marched on where others have fallen, it is their challengers who are operating under the tension and pressure.

Norwich’s task is clear, keep on winning. Comparisons to Fulham last season are fair, but unlike the Cottagers promotion campaign, City has proved they can win robustly and ugly. Fulham won the playoffs because they lacked that side to their game, thus missing out on the automatics.

A primary protagonist for the surge up the table is Teemu Pukki.

Despite many opting for terminology such as a ‘drought’, Pukki has still been pivotal to the cause with his assists and chance creation. The tireless, selfless nature of his graft defines him deeper than just his goals. He’s a goalscorer, of course, but he is also someone willing to help his teammates through his runs and the positions he obtains.

That defensive trackback in the second period underlined the relentless nature of his game.

Goals number 25 and 26 arrived on Saturday and broke every conversation surrounding his lack of goals. He is an instinctive, natural and all-around striker. Pukki is someone who contributes to the efficiency and the fluidity of their play because of his mobility. He can play on the shoulder of defenders or drop in and occupy the space in front.

All of those were qualities he bought to Norwich on a free transfer. Somebody within Norwich’s recruitment staff needs a firm pat on the back.

Pukki deserves to lift the Barry Butler Memorial Trophy in the weeks to come.

This is one of the greatest seasons a Norwich City striker has recorded in history. Recall Grant Holt, a legend of the football club, never did he manage to score more than 24 league goals in a season.

Aside from his goalscoring prowess, his overall contribution is worthy of accolade. Plenty are worthy contenders for the player of the season award but Pukki edges above them. His rich seam of productivity continues, the aim now is from him is to run the record, set by Ralph Hunt with 31, close.

For Farke, an afternoon of near perfection was tainted by the red card to Emi Buendia.

Prior to his dismissal, he was undoubtedly the best player on the pitch. Through his technical quality and tenacity, he is unplayable. Often the only avenue available to halt him within his tracks is to resort to fouling him. Considering QPR managed to notch up the most fouls recorded against Norwich this campaign, his frustration is understandable.

This was another starring cameo that was blotted by a rash tackle from the Argentinean.

Taking matters into his own hands is a sign of his naivety and inexperience. Buendia is still only 22, in the infancy of a career that promises so much. Last season, he was disciplined for his behaviour on social media and spitting at an opponent but has educated himself since those flashpoints for Cultural Leonesa.

It was naïve. It was mistimed. It was a red card.

His treatment had been constant, and the protection he received from the referee was minimal. The disappointment is that these column inches should be discussing Norwich’s match-winner, now they could face three games without him.

For all of Farke’s qualities, his reluctance to make substitutions is frustrating. Buendia was being kicked constantly, that’s when Farke should have removed him from proceedings when acknowledging the game was won. Those protagonists on the bench may be called upon to provide a moment of magic in the run in. They need minutes.

Buendia is a joyful player. One who naturally provokes emotion because of the way he moves the ball through the lines. His defensive work is just as impressive, numerous times he occupied the full back position. His enthusiasm needs to be curved and put into his practice into his work on the ball rather than onto his opponents.

Norwich haven’t won a game in which Buendia hasn’t featured, that is another hurdle they need to overcome with the next three games.

Regardless of the dismissal, Norwich will be dining at English footballs top table next season. Donning a tuxedo, they need to convince consumers they possess the quality to have a permanent seat at the table.

They can grow into the tuxedo, but ensuring it fits is paramount. It doesn’t need sparkle or glamour but simply needs to operate effectively.

They don’t need to rip up the foundations of what they constructed, nor do they need to sanction the purchase of big money signings.

Instead, they need to maintain what they’ve built. Recruit well and play with confidence, easier said than done.

Focus on the infrastructure and retain that expressiveness that makes them so watchable. They need not fear anyone; they are young, dynamic and intelligent.

Six games to play and one task that still needs completion, but Norwich City march on.