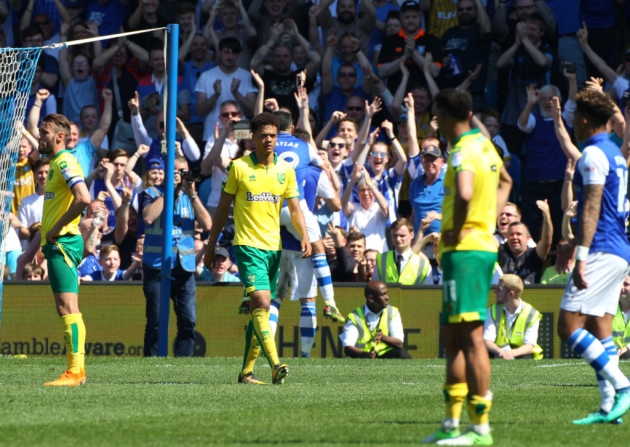 It’s been an erratic season for Norwich City which has, coincidentally, resulted in mid table mediocrity.

The season felt over after Wes Hoolahan’s grand farewell last Saturday. This encounter against Sheffield Wednesday was a sobering reality of the hardship the City hierarchy will have to contend with this summer.

As conclusion’s go, nobody could have scripted a more devastating final bow in a Championship campaign which offered so much optimism but delivered so little. Numerous drubbings away from home against the likes of QPR, Millwall and now Sheffield Wednesday will overshadow a campaign largely full of disequilibrium and disappointment.

Admittedly, there have been flickers of positivity. Running Arsenal and Chelsea close in the respective cup competitions is evidently a highlight along with an unbeaten run, a new clean sheet record, that infamous Timm Klose header against Ipswich and that performance against Aston Villa all stick out in the memory.

These moments haven’t been consistent enough however.

24 goals away from home is a damning indictment on a season whereby Norwich has transitioned from the joint highest scorers in the division to the sixth lowest. Farke solidified the previously decimated backline but hasn’t been able to source a remedy for Norwich’s offensive profligacy all season.

With more key protagonists exiting stage left, the anxiety and dread towards next season is understandable.

Norwich seems significantly behind those playoff seeking sides, and without a reliable and constant goal source coupled with a consistent streak, another season of mediocrity awaits. Farke’s style has had a year to manifest itself within the club, and yet it seems so far away from being an effective method to get the club contending at the top end of the table.

This was another powder puff performance.

Neat and tidy between the boxes but a chronic lack of decisiveness and ruthlessness in Norwich’s game needs to be eradicated if they are to become an upwardly mobile outfit next season. The top brass at Carrow Road will be aware of the problems, but they will be judged on finding solutions, and patience will be wearing thin amongst the supporters.

One of those solutions will be to recruit a striker with a consistent goal output.

It’s evident that Nelson Oliveira and Dennis Srbeny aren’t the answers going forward, but with limited resources, Norwich will be relying on uncovering another gem similar to Tom Trybull. Stuart Webber’s quest for a genuine goal threat is arguably the most important this summer; Alex Tettey and Farke underlined that at Colney this week.

Some will say it was a meaningless game and yes it was but the implosion today is disturbing. The massive goodwill from last week and Wes has rapidly evaporated. What an important summer coming up!! #ncfc #CanaryCall

Oliveria’s glaring misses provided an opportunity to make this game a competitive encounter rather than a procession.

The eccentric Portuguese international’s status at Norwich is looking increasingly insecure, those  opting to bet would get high odds on him being at Carrow Road come August. His talent is undeniable, but his attitude and application has been questionable for the entirety of this season.

All eyes turn to how successful Webber is at identifying a suitable and effective target.

It has been a pleasure to consume the talent of James Maddison this season.

If that proves to be the young midfielders final swansong donning yellow and green, what a disappointing manner to bow out for the Canaries, limping off after nine minutes and then returning with protective equipment over his knee.

Norwich had resigned themselves to losing Maddison, with the only discussion being how much City could receive for their starlet. A lot of their upcoming transfer policy hinged on the big sale of Maddison, let alone stabilising the clubs financial situation.

That must all wait now until the extent of his injuries are made public.

This season has been completely underwhelming. Webber/the Board have convinced us we need to be patient & are a club in transition. Unfortunately, this transition is to a mid table Champ side. Can’t see us being anything more than this under the current ownership structure. #ncfc

Evidently, talks of transfer fees and imminent departures come secondary to his welfare. Everyone will be willing Maddison well, his quality this season has been worthy of Premier League attraction, and thus let’s hope this injury doesn’t hamper his chance to test himself against the best in the world.

His influence has faded in the final stretch, but that was naturally expected with the amount of minutes played for club and country coupled with Farke’s rigorous training programme. If Maddison does leave, there is no doubting that Norwich want Moritz Leitner to fill his place.

Leitner evidently possesses quality, but he hasn’t blossomed in NR1. Without Maddison, alongside being deployed in an advanced role, he could yet prove to be a coup.

The progression many supporters craved hasn’t happened at the rate of knots most would have hoped and an underwhelming campaign has culminated in the security of mid table. With the financial constraints gripping the club even tighter, it’s difficult to see next campaign being a promotion challenging one.

Was always going to be an average season! I’m not negative or positive about it. It is what it is. Recruitment going to be massive again in summer. Need 2 strikers who can find the net #ncfc

Going into the summer on the back of a shambolic performance and result at Hillsborough won’t be the way Farke wanted to transition into the summer, but one thing is for sure, he will need to display a substantial change or those murmurs of discontent will transcend into calls for action and votes being made by feet.

This is another big summer for Norwich City, and one they can’t afford to get wrong.

As a final footnote, thank you to everyone who has continued to read, watch and consume TalkNorwichCity content this season. It may not have gone the way we’d hoped on the pitch, but as a club, we continue to turn up, support and through togetherness, we can go again.