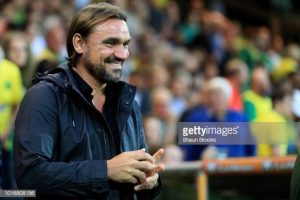 Self infliction is proving to be the most hurtful factor in Norwich City’s game at present.

As Norwich lost possession far too easily, all it required was a direct, diagonal ball to cause problems. They may feel a grievance at the manner in which they lost, but the issues are closer to home.

Understand fans complaining but the reality is – from someone who’s been to all three games so far – we’ve created enough chances to have 9 points from 3 rather than 1. Simply a matter of being more clinical. Wednesday night important but no need for major concern yet

Chris Wilder sprinted down the touchline in celebration, for him, revenge was a dish best served cold. He has won the ‘Disrespect Derby’, but perhaps can consider himself fortunate.

United started the game with energy and purpose. They deployed an aggressive and offensive press to restrict Norwich from gaining possession and playing through the thirds. This wasn’t something they could maintain, allowing Norwich back into the game by retreating and holding a more compact defensive shape.

Their physicality coupled with the effectiveness in which they operate made them a streetwise and together outfit.

But Norwich could have nicked it. They were ultimately left to rue Mo Leitner’s gilt-edged opportunity, as he lost his composure, the game slipped through Norwich’s fingers.

Leitner’s technical quality is undeniable, but he is yet to discover a place in this team where his quality can be displayed.

Farke’s insistence on operating with an inside winger in a lopsided 4-2-3-1 is hurting Norwich in both an offensive and defensive sense.

Without a recognised winger, United can create overloads and work between the gaps of an exposed right back. Furthermore, when looking to pounce on the counter, there is no real drive or pace beyond Hernandez.

Set pieces are still proving to be a thorn in Norwich’s game.

Farke continues to opt for zonal marking despite the concessions given away against West Brom last weekend, Wilder evidently did his homework with profitable rewards as they undone Norwich’s set piece set up on multiple occasions. 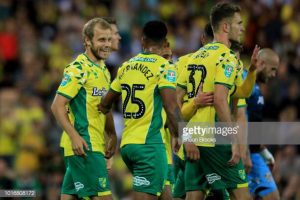 The alarming rate at which City are conceding is a contrast to last season. The lack of a natural right back is costing Norwich points, and whilst Ben Marshall is getting by, Norwich require solidity.

Word spreads in the Championship, and without rectification, Norwich will get exposed time after time at this level. Hard yards are needed at Colney to eradicate the faults or they risk being an expensive area for the Canaries.

Let me make it clear. not saying Farke out, an personally I don’t think the club would consider replacing him at this stage but the Farke out cries will start sneaking in now. #ncfc have the players. Just not getting even 50% of their ability out of them currently. #canarycall

In honesty, Norwich probably warranted more than they left with.
After an initial struggle in the early exchanges, Norwich did begin to assert their style on the game. This wasn’t possession for the sake of it either, but dynamic and fluid play between the thirds, usually orchestrated by the lively Onel Hernandez.

His lack of end product was highlighted by Farke last season, but as he recorded his fifth assist of the campaign, his response to those question marks have been deafening. He’s a torment for defenders to play against because of his ability to go inside and outside.

Said when Norwich appointed Farke he needed 18 months until he could be judged properly. He’s got three months left with the jury still very much out. #ncfc

If he can maintain these standards, he could prove to be a major protagonist and ease the hole left by Maddison in the sense of his productivity.

Another reason for optimism is the form of Jordan Rhodes. The joy was etched upon his face as he stood in front of the imposing Kop with his arms outstretched.

Rhodes knows the back of the net is.

The initial flick on in the build up of his goal and then the instinct to move to the back post was predatory. His movement was that of a striker who comes alive in the box. That archetypal centre forward play hasn’t been witnessed since a certain number nine departed the club.

Norwich have unearthed a genuine goal threat, something that was hard to come by last season beyond James Maddison. It was nice to see Rhodes and Tim Krul, who pulled off an excellent save and oozed more confidence, lay down the ghosts of last weekend.

Norwich have been better than the single point suggests, but ultimately points won you prizes and performances are forgotten.

That elusive first win of the campaign is looming large and pressure will continue to mount on Norwich until that win is recorded. Wednesday’s fixture against Preston feels like an opportunity to get off the mark, but circling winnable games in the Championship is a fruitless exercise. 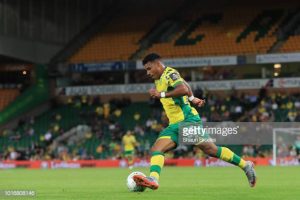 Three wins in nineteen games is the statistic which will be prominent in supporters minds, but they have created chances and no-one could complain if they actually had nine points out of nine.

Alex Neil will not allow Norwich time to lick their wounds. His Preston side will be determined to win for their manager in his old hunting ground.

Context is key, the season is still in its infancy but there is a genuine cause for concern.

If Norwich can maintain the level of performance and eradicate the repeating errors, either through training or personnal change, then they could kick start their season.

For now, all eyes turn to Preston, and the pressure is mounting.