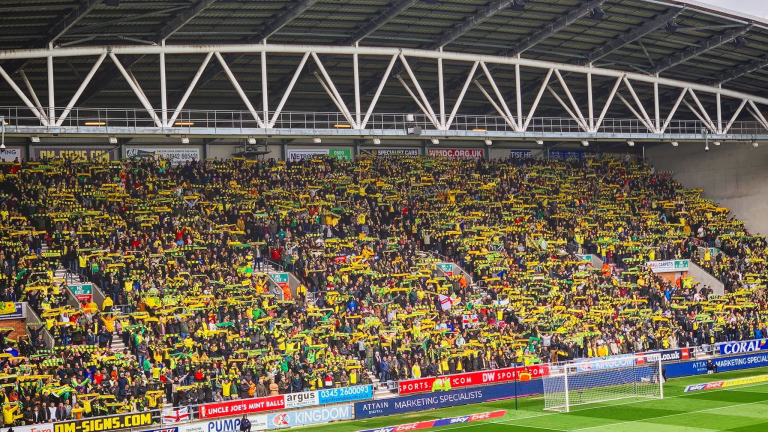 Facebook Twitter Reddit Pinterest Email
Over 5,300 Norwich City supporters embarked on a lengthy trip up to the North West to the DW Stadium to watch Norwich play relegation threatened Wigan Athletic. Our man Connor Southwell was one of them.

Football is an emotive game.

That’s the reason so many find themselves devoted to it; there’s a community within it that allows for definition of character and escapism for ninety minutes. It’s an opportunity to feel a part of something greater. As a collective, you’re united behind one aim, one purpose. Generations share the same patch of land and vent, rejoice and sing in pure togetherness.

As children, we are all seduced by the smells and experiences the game provides.

Anybody searching for reasoning as to why a vast number of Norwich City supporters wrestled with their own sanity to depart Norfolk at preposterous times in the morning need only to reference above. Aiming to create a yellow wall, this was a quest of inclusivity and colour to support a team who have provided some much joy since August.

Those who aided the love affair who no longer stand on the terraces are present, carried by those who pull the shirt on in the morning, dreaming of what could be. With the Canary emblazoned upon their chest, this was more than watching a game of football but instead being apart of a season which has produced so many positive narratives.

Regardless of subsidisation of ticket prices, this was a mammoth effort from supporters who have had to endure the darkest of days on the road in years prior to this campaign. An invasion of colour swarmed Wigan, all to watch a team with whom they have fallen in love with.

Although those occupying the coaches, cars and trains will, initially, reflect on the fixture with frustration, often the bigger picture is more flattering than the close-up.

The masses descended on the DW Stadium conscious of the potential situation should Norwich have walked away with three points. The paradigm has shifted from it to when promotion is sealed, Sunday’s fixture proved if anybody is expecting a favourable and comfortable ride, they need to reconsider their predictions.

For prolonged periods, Norwich failed to locate those gears that have been responsible for the dismantling of numerous Championship sides this season.

Similarly to Wednesday, they would be frustrated by a side who implemented a style of play which, to the detriment of the Canaries success, worked efficiently to disrupt the rhythm of their play. Wigan pressed with intensity, led by Leon Clarke, the streetwise operator who caused discomfort for the back four of Norwich all afternoon.

With the supremely talented Reece James dictating play and exuding quality throughout proceedings, Wigan was a difficult outfit to contain.

Pragmatism coupled with attacking intent, the Latics had devised a game plan to reduce the space between the thirds but also to press as a collective and force Norwich to play direct, only for it to be turned over and for them to regain possession.

Tenacious and intelligent in their work off the ball, it’s unsurprising that they find themselves unbeaten at home since New Year’s Day. Whether it was Sam Morsy breaking up play in central areas or Anthonee Robinson’s dynamism, they didn’t resemble a side scrapping for their lives but one competent and confident in its capabilities.

Norwich is yet to conquer the statistic of managing a win while Emi Buendia has been absent.

In Buendia’s absence, they don’t possess the technical quality to play between the lines with the operators they started with on the pitch. Norwich lacks that creator able to locate half spaces and play on the turn intelligently. Todd Cantwell is a developing prospect, not worthy of being labelled with the tag of a weak link.

Cantwell is operating against the backdrop of expectation due to the harsh assessments being aimed in his direction. Although he doesn’t seem completely comfortable operating off that right-hand side, he is still nurturing his game at this level. Instinctively, his off the cuff style of play is mesmerising at points.

Pinpointing one protagonist is simple in relation to the last couple of results, but with Moritz Leitner and Mario Vrancic having watching briefs, it’s time for Norwich to revert to the philosophical approach which has helped them reach the summit.

The Bosnian, in particular, is showing some tantalising touches which merely stokes the excitement to witness him on a more constant basis. Leitner and Vrancic brought a greater degree of control into that midfield phase in possession, which had been frenetic prior to their arrival into proceedings.

Daniel Farke decided to introduce Leitner, Vrancic and Jordan Rhodes in a triple substitution and transition into a three at the back formation which was responsible for the uplift against Reading. Opposing sides fatigue is a contributing factor to the success of the system, but equally, it grants City with greater control in the middle phase.

It leans itself to the ball playing quality of Leitner and Vrancic.

Equally, Norwich can retain that width provided by the wing backs which has proved integral to their success to date. Combine that with the offensive cohesion Vrancic provides alongside the metronomic qualities of Leitner and it serves as food for thought for Farke ahead of the Good Friday encounter against Sheffield Wednesday.

Farke’s proactiveness ensured the Canaries left with a point, one which could prove intrinsic to crossing that line and securing promotion.
The rareness of an off colour performance is excusable given the sensational football and happiness they’ve created around the football club.

Insert a quote about a marathon here.

Some will draw concern at the performances of the last two fixtures, but describing it as a wobble seems somewhat of an overreaction.

Regardless of performance, this result has reaffirmed their seven-point advantage over Sheffield United in third position. Despite not operating at full throttle, they are still finding solutions and responding to adversities in a way that can only be defined as character and mental strength.

Those viewing beyond the next game and evaluating circumstances need only know this; two wins and Norwich City will return to the Premier League.

Discussion of a title can be put on ice temporarily; priority must be on avenging Sheffield Wednesday before casting those eyes ahead to a potentially special special day in Stoke.

Construction of this team has been achieved through a lack of expectation and although those players aren’t storming to the title in the manner some anticipated, now is the time to fill your lungs and roar them home.

It’s in their grasp. For a memorable season to become an immortal one, six points are needed.