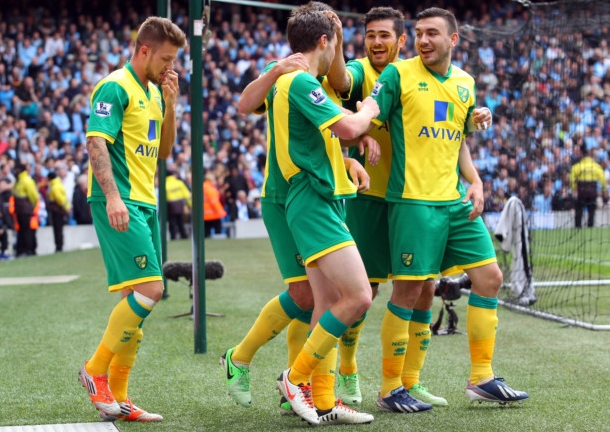 I’d much rather have players that have some fight over individual talent. But I’m not talking the Nelson Oliveira kind of fight…

Cast your mind back a short while to Paul Lambert’s Norwich City promotion sides. Collectively as a unit they were an impeccable, well oiled team. Of course we had Holty back then, but the players weren’t world beaters. They had fight. Yes, they let in plenty of goals but they all understood exactly what to do if we were winning, drawing or losing. Over all of this; most importantly, the players had each other’s backs.

Do Norwich City have this now?

Unfortunately, we’ve come up against lots of teams that have that fighting spirit this season. Much like David Wagner’s Huddersfield side who comfortably zipped the ball about and worked through our defence with ease. The same goes for Brighton and others too.

If Norwich City lose football matches because of a wonderful long range strike or fantastic free flowing football then so be it. But In my opinion, regardless of who our manager is – it’s absolutely inexcusable as a player after crossing that white line, to lose football matches because of a lack of grit, lack of passion and lack of fight. That’s the three qualities every fan looks for in their team before anything else.

That’s why it’s actually a really good thing that we have to sell players to buy during this window. They might be great mates in there, but you can’t deny that we’ve now got a very stale squad now. I bet you could all name at least 5-6 players that look like they want to leave this football club.

I don’t get the hype with Martin Olsson to Swansea. He’s a decent player and probably our most talented left back, but does he want to be here? No.

It’s obvious he’s wanted to leave the club for ages. So why do you care if the club sells a player that doesn’t want to play for us? I’d be interested to see if those that slated me for backing Toffolo over Olsson a few weeks ago, still have the same opinion now as they did when he signed his latest ‘really important’ contract…

If you are a new signing walking into that dressing room you’re going to seriously question what on earth is going on. How is a team of this much talent not nearer the top of the table? It would poison them straight away.

Of course, there’s a handful of Norwich City players that do really want it, the likes of Russell Martin and Ivo Pinto for example. They genuinely care about our club. They appreciate and clap the fans after a game (the basics). But the others are dragging them down – The board need to try and move those negative want-away players on and bring in fresh faces that will motivate the others.

The bottom line is that Norwich City need a new manager with fresh ideas and consistent winning experience, if we are to actually move forwards as a club (That’s going to cost you more money than Alan Irvine, Delia).

I feel for the player who has to churn out the same rubbish after every single loss. That mono tone “We’ll brush ourselves down and go again next week” number. It’s glaringly obvious that a change of manager is needed to get this team going again.

Back to the transfer window though – Norwich City need to firstly look to recruit players with fight, desire and passion over their individual ‘potential’ talent. And if the recruitment strategy fails for a third season in a row, it’s (seriously) time to give our youth players a chance.

On The Ball, City!