Norwich were just a few kicks away from knocking Premier League giants Chelsea out of the FA Cup in midweek and will be hoping to use their solid performance as a catalyst from which they can kick on towards the top six.

Sheffield United continues to cling onto a play-off place, but with a handful of seemingly solid new additions all available here, Chris Wilder should be looking to secure that play-off space over the coming months.

This promises to be an entertaining encounter between two sides that look set for interesting second halves of the season. The hosts have done well to hold onto star man James Maddison and will be hoping he can inspire another shock result here. 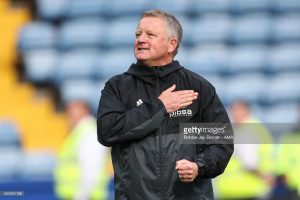 The ex-Northampton Town manager found the challenge of managing his hometown club too tempting to refuse and has discovered a great proportion of success in Yorkshire, the highlight of which was leading Sheffield United to the League One title in his first season at the helm.

He may have ruffled a lot of yellow and green feathers following the reverse of this fixture but the Yorkshireman has seemingly overachieved with a close knit squad. The philosophy is to recruit hungry talent from the lower leagues and ushering them in a fully functioning Blades unit.

Wilder has risen up the divisions and this is his first season in the Championship. In the last three years, he has conquered League Two, One and is fighting for the playoffs in hope of reaching the Premier League.

Wilder oversaw his boyhood club recording 100 points last season, and 99 the year before as he won the title at Northampton Town. He knows how to construct a winning outfit, and has applied this wonderfully to the pitch on Sheffield United.

Despite his off field antics, it’s difficult to admire the work Wilder has done in football management and at the age of 50, his stock is continuing to rise in the game.

He has a managerial win percentage of 44.2% and his all-encompassing style of football has seen Sheffield United resemble the style seen under Neil Warnock, admittedly with a more aesthetically pleasing brand of football deployed. 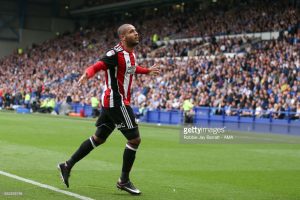 At 32, few would have expected Leon Clarke to deliver in the manner he has at Bramall Lane this season.

From scrapping with Paolo di Canio at Swindon to scrapping for promotion to the Premier League, Clarke is the epitome of a journeyman. He has forged a career predominately in League One, yet under Wilder’s supervision, Clarke has become an avid goal scorer and is the joint highest goal scorer in the division.

15 goals in 23 appearances this season have seen Clarke become a prolific entity. Alongside his goal scoring prowess, his involvement in build up play and his target man play has been reminiscent of a former Norwich City legend.

He has seemingly discovered a formation which plays to his strengths and with his aerial ability combined with his penalty area play, he has posed a real threat to opponent’s defences all campaign. Norwich will need to defend with real physicality to reduce Clarke’s threat. His proneness to be caught offside could see Norwich deploy a slightly higher defensive line.

The Wolverhampton Wanderers academy graduate was signed from Bury following a prolific season for the Shakers whereby Clarke netted 15 goals in 32 games. The target man has been a pivotal figure in Sheffield United’s armoury throughout this campaign. 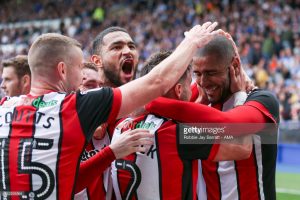 Similarly to Norwich, Sheffield United has discovered success whilst deploying a 3 at the back formation. Contrast to the hosts however, the Blades operate with a predominately direct passing style combined with a zonal press which condenses the pitch.

In turn, teams will struggle to play through the thirds due to this defensive organisation installed upon Wilder’s arrival. They do enjoy possession football, but the variation in style of passing between direct and shorter passing allows for alternate approaches to attack.

They also pose a great threat from set pieces and have created a plethora of chances from these situations. Norwich may opt to adopt a man to man marking system as oppose to the zonal marking Farke prefers to counteract their strength in these situations.

Sheffield United will be an organised and all encompassing outfit as they take to the pitch at Carrow Road keen to right the wrongs which occurred at Bramall Lane in September.

Connor: Daniel Farke’s men will be feeling the after effects of pushing the Premier League to the limit on Wednesday evening and fatigue could be the deciding factor in this encounter. Sheffield United is enduring a tough run of form and Chris Wilder will be keen to get them back on track, beginning at Carrow Road.

The visitors have a full roster of new signings to call upon whilst Norwich may rotate in an attempt to rest tired legs and minds. Score draw here. 2-2

Jack: This is sure to be a very tough test for Norwich City but I feel a lot more confident going into this than I have done in previous weeks. Sheffield United has slumped slightly while Norwich’s regime is starting to form.  The worry is of course whether City’s players will be fatigued from Wednesday’s mammoth effort in West London but the spirit taken from that should outweigh any negatives.

The return of Tettey could be vital and defensively we look solid. Nelson’s lack of goals does worry me which puts pressure on the players behind him to chip in. With all of that being said however, I’m feeling positive prior to this fixture. 2-0