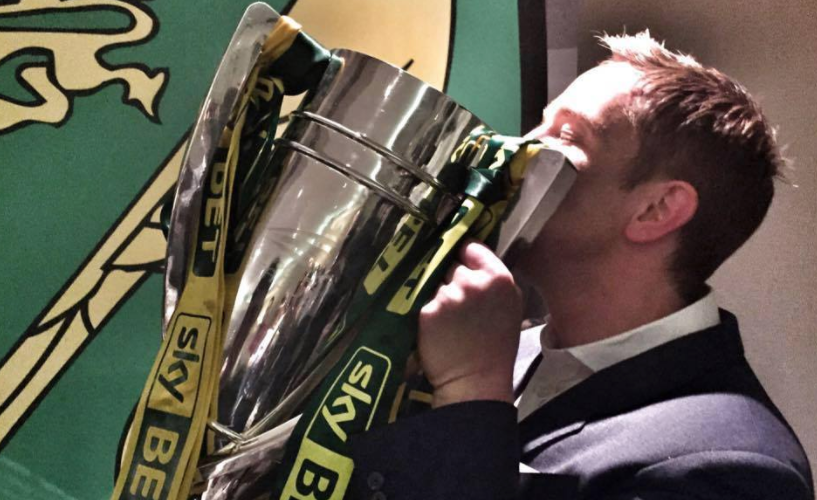 Hi Simon, thanks for chatting to TNC. How’s things?

All good thanks chaps. Very much enjoying my first season on the Premier League but missing my trips to Carrow Road!

If you could sign any player for Norwich City in this window who would it be and why?

Scott Hogan. I want players who as well as being talented have a real hunger. Too often in recent times we’ve signed players who have arrived with decent reputations but haven’t looked like they’re giving their all often enough. We all remember how well Grant Holt did for us. A player who had come via the non-league route and who as well as the goals always gave his all for our club. Scott is a player who who has made a similar journey and this season Brentford have been reaping the rewards and at only 24 there is much more to come. Sadly as I write it looks like a Premier League move is his next destination.

Being a presenter must make it very difficult to watch your team in the flesh. Have you managed to see any games in person yet this season?

The 2014-15 season gave me plenty of opportunities to watch Norwich in the flesh but most times it was in my role as Sky’s Football League presenter culminating in a ‘small” Play Off semi final against some side from Suffolk and then that magic Monday in May in the Play Off Final. The Play Offs were a nightmare to present with so much riding on the result and of course a lot of scrutiny as to whether I would strike an impartial note. I think I managed it but it was so hard getting that balance between watching the games as a fan and trying to do my job as professionally as possible. Sadly my trips to Carrow Road this season have been few and far between as I’m so often working when Norwich are playing – living in Berkshire doesn’t exactly help either!

It looks like Alex Neil is here to stay at Norwich City this season – Do you think he can recover the current situation we find ourselves in?

I think he can but I’m not sure he will. In some ways I admire the board for not being trigger happy like so many clubs and just getting rid, but the problems go back beyond this season. Last season we had a real opportunity to finally establish ourselves in the Premier League once again. We won three of our final eighteen games; lost fourteen on the road including defeat to an absolutely abject Aston Villa. The signs were already there that Alex was struggling to get the best out of the squad and this theme has continued this season culminating in that inexplicable defeat to the Championship’s worst side Rotherham. But every time it looks like it might be the end of the road for Alex we pull out a result and as I write the Play Offs are just two points away. I don’t think the board are going to budge on this one so maybe it’s time we get behind AN and make that top six.

Your top 3 City players of all time – GO!

Grant Holt. Darren Huckerby. Iwan Roberts. They always gave their all and I love players like that.

Finally, where do you think and hope Norwich will end up this season – Is it too late to reach the promise land?

The Play Offs are absolutely achievable but if our away day misery continues I think we’ll miss out. Eight defeats on the road are the most of anyone in the top half and two seasons ago we lost only five all season. If we did make it I’m not convinced we’ve got what it takes to repeat our success of two years ago. Looking at the teams currently sitting in the Play Off positions we’ve yet to beat any of them and have lost to all but Sheffield Wednesday. I hope I’m proved wrong!

Thanks for talking to us Simon!

Not a problem chaps!